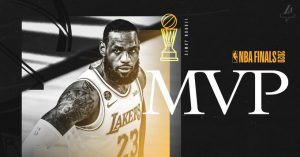 The Los Angeles Lakers are back on top of the NBA mountain.

LeBron James becomes the first player in NBA history to win an NBA championship with three different teams, as the Lakers close out the Miami Heat 106-93.

James logged in 28 points, 14 rebounds, and 10 assists in 41 minutes on his way to a fourth ring. James was also named Finals MVP for the fourth time unanimously. Only Michael Jordan has more with six.

Between COVID-19, social injustice, and a mid-season stoppage, the Lakers kept their poised before the bubble and during the bubble.

For the franchise, their biggest loss of 2020 was the untimely death of Kobe Bryant. Anthony Davis, who is now a first-time world champion, didn’t want to let the moment go by without talking about the Black Mamba.

“We didn’t let him down,” said Davis. “Ever since the tragedy, all we wanted to do is do it for him. … It means a lot to us. It’s a tough moment. He was a big brother to all of us, and we did this for him.”