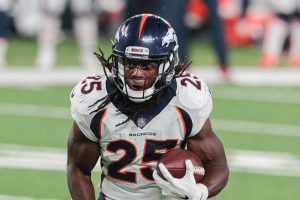 Melvin Gordon has found himself in some legal troubles.

According to police records reviewed by Mike Klis of 9 News, Gordon was cited by the Denver Police Department late Tuesday night for driving under the influence and speeding. The 27-year-old was cited for driving between 25 and 39 mph over the speed limit.

Gordon is set to be arraigned on Friday, Nov. 13. The NFL will review the case and could hand down discipline regardless of what happens.

“We are aware of the situation involving Melvin Gordon,” the Broncos said in a statement. “Our organization has been in communication with him and is in the process of gathering more details.”

Gordon just landed in Denver after signing a two-year, $16 million contract with the Broncos in April.

Gordon was coming off his best performance with the team, recording 23 carries for 107 yards and two touchdowns in a 37-28 victory over the New York Jets in Week 4.

The Bronco’s next game is a makeup one with the New England Patriots on Sunday afternoon. No word to what Gordon’s availability will be for that game.

Gordon could face punishment under the NFL’s Personal Conduct Policy pending the outcome of the case.

The post SOURCE SPORTS: Melvin Gordon Charged With DUI and Speeding appeared first on The Source.