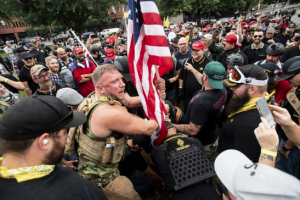 According to several reports, staunch supporters of President Donald Trump rallied in Washington this past weekend behind his unwarranted claim of a stolen election in what was dubbed the “Million MAGA March.”.

Crowds of Pro-trump supporters clashed in the streets with Anti-Trump protesters, with videos posted on social media showing fistfights, projectiles, and clubs. Police arrested at least 20 people on a variety of charges, including assault and weapons possession, Washington D.C. Metro Police said. One stabbing was reported, two police officers were injured and several firearms were also recovered by police.

A week after Democrat Joe Biden was declared the winner of the election, demonstrations in support of Trump also took place in other cities.

The marchers in the nation’s capital included members of the Proud Boys, a neo-fascist group known for street brawling with ideological opponents at political rallies that were namedropped by Trump himself, asking the group the “stand back and stand by.’ Videos posted on social media showed some demonstrators and counter-demonstrators trading shoves, punches, and slaps.

The post Stabbings, Assaults, and Arrests at Pro-Trump March in Washington D.C. appeared first on The Source.