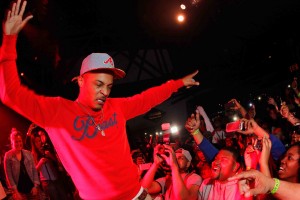 T.I. recently dropped his latest album The L.I.B.R.A. and confirmed a years old rumor that one of his friends urinated on Drake back in 2010.

T.I. confirmed the rumor in the song “We Did It Big,” featuring John Legend. In the song, T.I. raps about his friend Terrance Beasley, aka Cap, who was killed in prison last year. “While I’m fightin’ my own somehow got you home,” T.I. raps. “So drunk in LA, end up pissin’ on Drake, shit/Fuck it, that’s still my brother since back in the trap house,” T.I. raps.

The incident happened back in 2010 during a screening of the Idris Elba and Chris Brown movie, Takers. Drake and Beasley were at the screening, and Beasley was so drunk that he began to urinate on himself. Somehow some of it got on Drake.

The incident was brought up in Meek Mill’s diss track towards Drake “Wanna Know” during their beef in the summer of 2015. “You let Tip homie piss on you in a movie theater ni**a, we ain’t forget/Real ni**as back in style this shit is lit/This that Ja Rule shit and 50 Cent,” Meek rapped. The bar went largely unnoticed due to many believing that Meek’s diss was inferior to Drake’s “Back to Back.”

The post T.I. Confirms Rumor That His Friend Urinated On Drake appeared first on The Source.