TESTING every person arriving in the UK and ditching the Covid exemption list will get holidays back on track this summer.

As it stands, some travellers don’t need a negative test when arriving in Britain – but this may be essential to block Europe’s third wave entering England, experts say.

As The Sun exclusively revealed last month, testing everyone who arrives in the UK is “sensible” in order to shut off the continent’s current surge in Covid cases.

Leading scientific adviser Professor Neil Ferguson said today that testing everyone coming from Europe could be required to keep Covid variants of concern under control.

Asked about the risks with opening up to international travel, he told BBC Radio 4’s Today: “I think the key thing is the risk of importing variants which might undermine our vaccination programme.

“The one we’re particularly concerned about at the moment is the South African variant called B.1.351.

“The concern here is the proportion of cases reported in a number of European countries which are this variant is now up to anywhere from 4-5 per cent in France and up to 17 per cent, nearly 20 per cent up in Luxembourg.

“So rather than some of the ‘red list’ countries which are far away, I think where the real policy challenge lies in terms of mitigating risk is around what to do around travel to Europe and back.

“I think that (testing everyone from European countries) would be sensible and reconsidering the exemptions in place at the moment.

“At the moment, there is a very long list of exemptions for jobs and professions – if you’re a truck driver or travelling on Government business, then you don’t have to quarantine and you don’t have to even test.

“I think it would be sensible for at least everyone to be tested when they are coming in.”

Boris Johnson is today revealing the path out of lockdown and will tell Brits about the ‘traffic light’ system for starting international travel.

Under the rapid testing and three-tiered system, arrivals from green countries would require hardly any restrictions apart a 15 minutes lateral flow test – likely taken when arriving in the UK.

Amber nations will likely require negative PCR tests before travel and some form of quarantine, as well as a lateral flow test on arrival.

But hotel quarantine will continue for all red-list nations.

The cost of the test – usually around £30 – will have to be forked out by the passenger.

Vaccines passports or recent tests are still likely to be needed by most holiday destinations, with Virgin Atlantic becoming the latest airline to announce a trial. 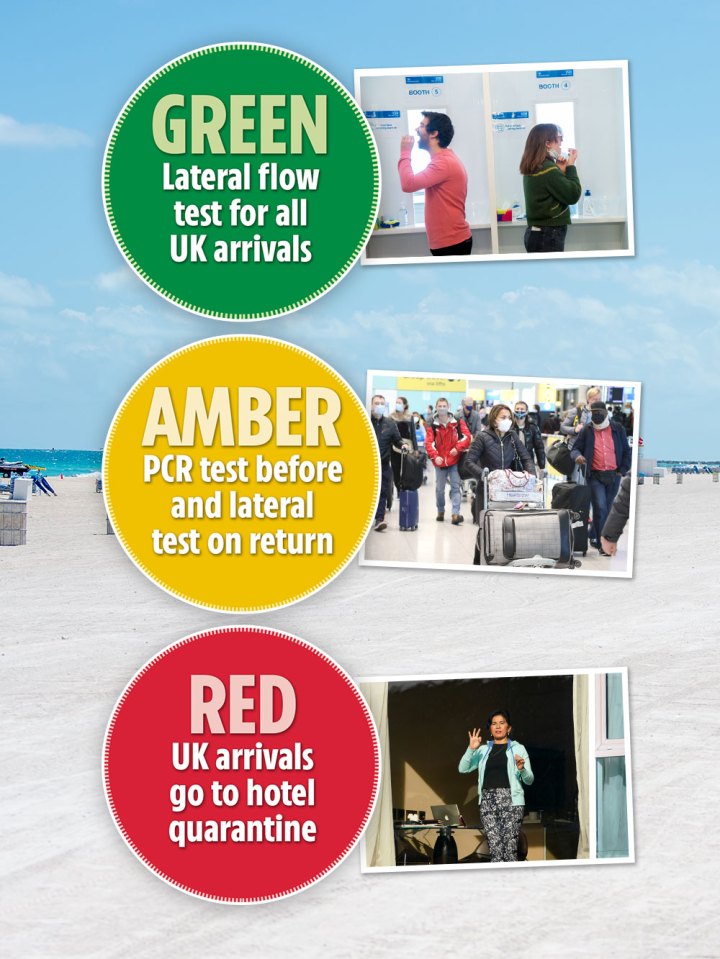 Unlike last year’s travel corridors, the system will be based on the prevalence of vaccine-busting variants and jab roll outs rather than simple infection rates.

Airline bosses and the travel industry are confident the proposals, which are about to land on the PM’s desk, will finally get global travel moving again in time for the July rush.

As it stands going on holiday illegally could land you with a £5,000 fine, but that is still expected to be dropped under phase three of the road map.

And a single-shot Covid jab that could save foreign holidays for youngsters was last night hailed as “a game changer” by travel bosses.

Boris Johnson also raised hopes by unveiling a mass testing blitz in which two a week will be offered to everyone in England.

The one-dose Janssen jab is set to be available by July for 18 to 30-year-olds — so they could be off to party islands like Ibiza within months.

People will be able to collect or order batches of their free Covid tests whether they have symptoms or not.

Most read in Travel


Mom-of-four, 27, dies from cancer after check-ups halted by Covid crisis


Mum-of-four, 55, paralysed from eyes down after heartbreaking Covid battle

As part of the PM’s plan to get the nation back to normal, he will rapidly expand testing — with results in minutes — to everyone in the country.

Meanwhile, Covid vaccine passports could be used soon for holidays abroad. So far the rapid kits have been mainly aimed at office staff and those who have to leave their homes to work, alongside the NHS and schools.

The public will be able to order kits at home, get them through their workplaces, at schools, or via the network of testing centres which has been set up across the country.

No face masks or social distancing at FA Cup Semi Final as part of lockdown easing trial
3 hours ago
‘Reckless’ Sturgeon savaged for ‘pushing’ SNP Indy Ref with ‘NO IDEA’ of economic impact
3 hours ago
Indian Covid strain: Mutation detected in UK has ‘hallmarks of very dangerous virus’
3 hours ago
Twitter down: Crash blocks access for thousands around the globe – firm issues statement
3 hours ago
Queen hopes Prince Philip’s funeral will act as a ‘catalyst’ for family reconciliation
3 hours ago
Efforts to ‘ramp up animosity’ between William and Harry not ‘just distasteful but wrong’
3 hours ago

No face masks or social distancing at FA Cup Semi Final as part of lockdown easing trial
3 hours ago
‘Reckless’ Sturgeon savaged for ‘pushing’ SNP Indy Ref with ‘NO IDEA’ of economic impact
3 hours ago
Indian Covid strain: Mutation detected in UK has ‘hallmarks of very dangerous virus’
3 hours ago
Twitter down: Crash blocks access for thousands around the globe – firm issues statement
3 hours ago
Queen hopes Prince Philip’s funeral will act as a ‘catalyst’ for family reconciliation
3 hours ago
Efforts to ‘ramp up animosity’ between William and Harry not ‘just distasteful but wrong’
3 hours ago
Sarah Ferguson’s sweet gift to Queen ‘always brightens up’ Her Majesty’s day
3 hours ago
Covid panic: Canada on high alert with stay-at-home orders as cases overtake US
3 hours ago
Tricky conversations on hold for Harry and William as they talk over the phone
3 hours ago
‘Wonderful husband’ Philip recycled wedding shoes for 74 years ‘because of sentimentality’
3 hours ago
‘Harry Potter’, ‘Peaky Blinders’ star Helen McCrory dies, Murphy, Rowling pay tribute
3 hours ago
MHA deputes 25 doctors, 75 paramedics from paramilitary forces at DRDO’s upcoming 900-bed COVID hospital in Ahmedabad: Officials.
3 hours ago