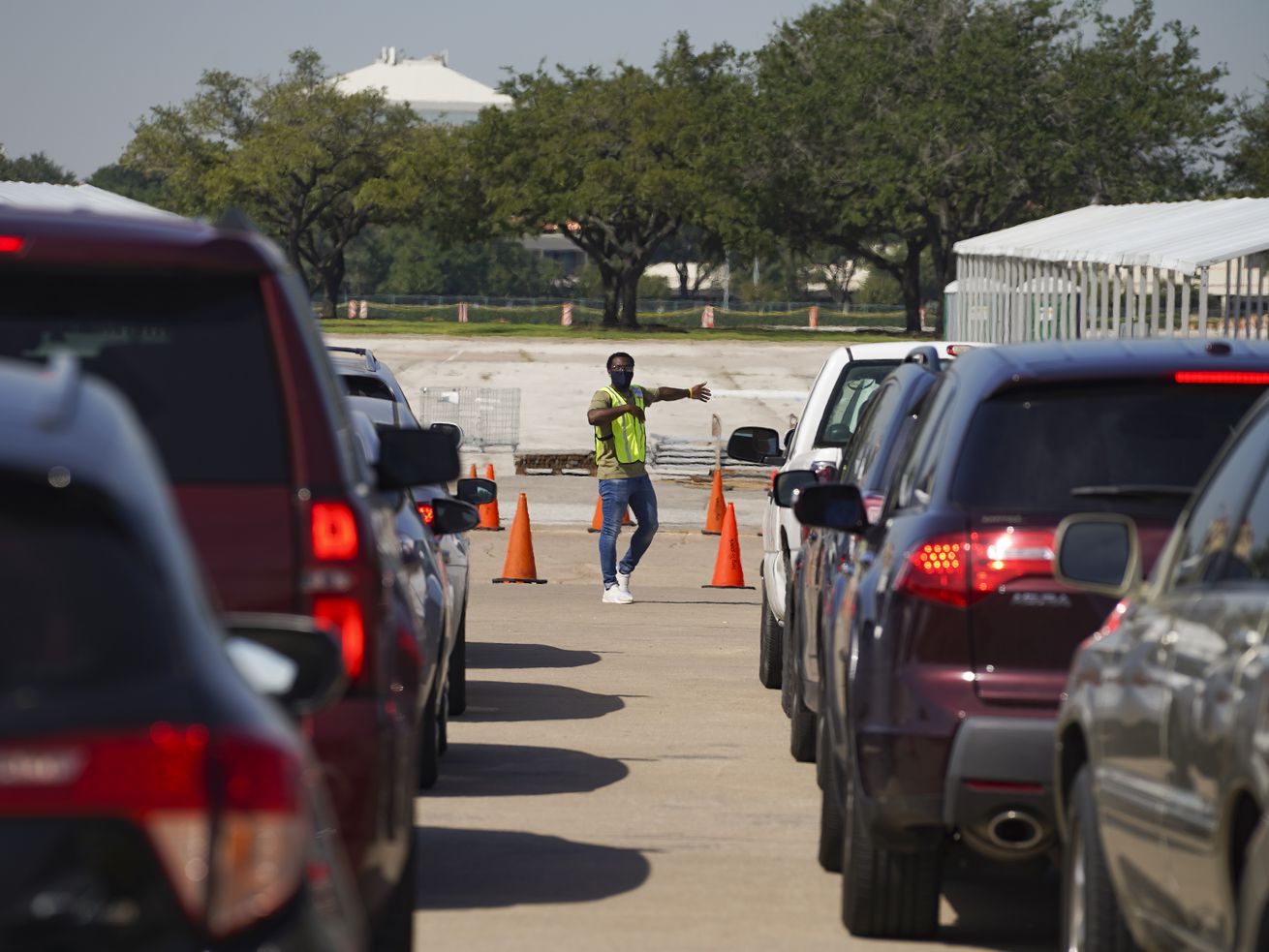 On Friday, a federal judge said counties could reinstate multiple drop-off locations, but now a higher court has stayed that ruling.

Some Texas counties have worked to expand access to absentee voting amid the Covid-19 pandemic, and the state has responded by limiting those efforts. On Friday, a federal judge ruled the state could not limit the number of ballot drop-off locations in each county.

But, on Saturday, Texas appealed the ruling, and a federal appeals court agreed that restrictions on ballot drop-off locations can stay in place until the judges officially rule.

On October 1, Republican Gov. Greg Abbott issued a proclamation that allowed for only one drop-off location in each of Texas’s 254 counties, regardless of population or geographic size. Abbott cited election security as a justification for the order. But it eliminated multiple drop-off sites available for Texans; for instance, Harris County — the third most populous county in the country — had to shut 11 of its 12 drop-off sites.

We’re seeing some wraparound action, but overall the line to drop of absentee ballots in Harris County is moving quickly. Thanks to Gov. Abbott’s proclamation this is now the only drop-off site in the county of more than 4.7 million. I’m live on @MSNBC w/ the latest all day. pic.twitter.com/n2mauqq20A

Abbott’s decision immediately drew legal challenges from advocates and voting rights groups, who sued to reinstate the drop-off locations, arguing that Abbott changing procedures in the middle of the election — after people have already started requesting their ballots — put an unreasonable burden on voters and ultimately undermined faith in the electoral process at this late stage.

On Friday, US District Court Judge Robert Pitman sided with those groups, saying that Abbott’s order put an undue burden on older voters and voters with disabilities, who make up the majority of absentee voters in Texas. Pitman wrote that Abbott’s restrictions would cause “absentee voters, if they choose not to return their ballots in person to avoid exposure to Covid-19, to face the risk that their ballots will not be counted if the USPS is unable to timely deliver their ballot after it’s been requested or unable to timely return their completed ballot.”

“These burdens fall disproportionately on voters who are elderly, disabled, or live in larger counties,” Pitman wrote.

This battle over Texas drop boxes represents just one of the fights over voting in the state this election season, and one of hundreds of legal challenges over elections across the country.

Friday’s decision was a victory for voters — and for advocates and some county clerks in Texas who wanted to see the drop-off locations reinstated. But the governor’s office quickly appealed the decision, and a federal appeals court agreed to maintain the restrictions until it formally rules on the case.

The fight over these drop-off locations is not quite over, and the final outcome could make a big difference in how easy it is for Texans — particularly older ones — to vote in this election.

The fight over the Texas drop-off locations, explained

The Covid-19 pandemic hit the United States in March, right in the middle of primary season and ahead of a contentious general election. All states had to consider the administration of their elections, whether by adopting additional safety protocols for in-person voting and vote-counting, expanding mail-in voting, extending deadlines for ballot counting, or implementing cure processes so voters could fix mistakes on their mail-in ballots.

Voting by mail in Texas is still pretty restricted: Unlike other states, Texas did not loosen its mail-in voting requirements, which only allow people to vote absentee who are over the age of 65, who have a physical disability or ailment, or are in jail or temporarily out of the county. Texas Democrats tried to challenge the age rule, but the courts denied the change. (There have also been other lawsuits around mail-in voting, including a recent one where the Texas Supreme Court blocked Harris County from sending mail-in ballot applications to registered voters.)

So the Texas drop-off locations are strictly for absentee voters to hand-deliver their ballots, offering an alternative for those who do not want to send their ballots through the United States Postal Service because of questions about the USPS’s capacity to handle the influx of election ballots this year, or who just want to know, for sure, that their ballots have been received by election officials.

In Harris County, for example, 11 locations drop-off locations were clerk’s offices around the county. The Harris County clerk’s office designated the 12th spot, at NRG Arena, as the main drop-off headquarters because, an official told me, it allowed for social distancing and more space to process applications in what was expected to be record election turnout. Travis County, another blue-leaning area, had four drop-off locations.

But on October 1, Abbott said, sorry, one drop-off location only. According to a court filing made on Wednesday, Abbott argued that no Texas counties, except for Harris County, had ever had multiple drop-off locations before the July 2020 primary.

Abbott’s administration argued that having multiple drop-off locations was bad for election security, arguing in a court filing that they provided “inconsistent safeguards to preserve the integrity of the election, such as a lack of poll watchers overseeing ballot deliveries.” It also claimed that “election fraud, specifically vote-by-mail election fraud, has proven to be a frequent and enduring problem in Texas.”

Advocates, however, say this security argument is not grounded in reality. Each drop-off location is staffed with sworn clerks, and voters must show a valid ID and give their signature at all locations.

“There was no legitimate justification to reduce the number of ballot drop-off locations,” Ravi Doshi, senior legal counsel at the Campaign Legal Center, one of the groups bringing a legal challenge, told me before Friday’s ruling. “That has been said by county election officials, who are the ones that actually administer this election.”

Doshi added that some county clerks see the drop-off locations are more secure since the ballots are going directly into the hands of election officials, avoiding the middleman of the USPS, and voters have to provide identification when they drop off their ballot.

Voter fraud in general is rare, and Texas’s attempt to investigate voter fraud unraveled after reviews of the citizenship status of voters swept up thousands of legitimate voters. Abbott has echoed President Donald Trump’s false claims about fraud in mail-in voting, but many of the fears he has highlighted — say, someone filling out a ballot for someone else — are highly unlikely to happen at drop-off locations given the ID requirements.

Rather than being about election integrity, voting advocates say Abbott’s order was created to disadvantage populous counties by making drop-off sites difficult to access and increasing wait times.

“It is just plain and simple voter suppression,” Grace Chimene, president of the League of Women Voters of Texas, one of the groups that joined a lawsuit against Gov. Abbott, told me earlier this week. “There is no other word — and it’s voter suppression that impacts people with disabilities and elderly voters.”

Harris County, for example, represents about 14 percent of Texas’s entire electorate, with 2.4 million registered voters. Harris and Travis counties — where Houston and Austin are located, respectively — also have large swaths of Democratic voters, including many Black and Latino voters.

Luis Roberto Vera Jr., national general counsel at the League of United Latin American Citizens (LULAC), another party to the Texas litigation, told me earlier this week that Abbott’s order is directly targeting Democratic strongholds, and the many Black and Latino voters in those districts. They want, he said “people who aren’t going to vote for Republicans, not to cast their vote. That’s all this is designed for.”

The constant changing of the rules and locations is also confusing, complicating attempts by voters to make and execute plans. This, advocates say, is part of the goal: not just to make it more difficult for people to vote by eliminating locations, but to make the process so convoluted that it may depress turnout.

Judge Pitman ultimately agreed with the plaintiffs’ arguments, that shuttering the drop-off locations would disproportionately burden voters who are older or have disabilities in large population centers. He also called Abbott’s arguments about security a “pretext,” finding that Abbott’s order did not promote security, since all of the drop-off locations follow the same protocol.

But Texas Attorney General Ken Paxton quickly appealed the decision to try to stop the judge’s order, saying it undermined election security and “creates confusion on the eve of an election and threatens the integrity of the election.” An appeals court then granted a stay in Pitman’s order, until it can hear the merits of the case — so allowing the governor’s restrictions to remain in place, for now.

Attempts to limit the vote are often done under the guise of guarding against voter fraud, and 2020 is no different. As in Texas, officials in Pennsylvania, Montana, and New Jersey, among other states, have faced legal challenges citing fraud and security on new voting accommodations.

Using allegations of voter fraud to restrict voting isn’t new, even if GOP attacks on mail-in voting are outsize in a year when many millions more voters plan to vote by mail — and in an election where the president is currently trailing in many polls.

But what’s happening in Texas, and really across the country, has deeper roots. Changes in voting procedure — particularly changes that could expand the electorate or make it easier to vote — are often seen as threats to those with easy paths to election and reelection under the status quo.

“The common element, unfortunately, is incumbents terribly interested in clinging to power and attempting to use their incumbency, to rewrite the rules for the election process in a way that changes the electorate, rather than changing hearts and minds of voters,” Levitt said.

Texas is no different. Its changing demographics and politics mean the state is trending bluer in a way that could remake the electoral map. Trump remains ahead in most Texas polls, but Democratic candidate Joe Biden is not far behind, and he’s investing money there.

This political context matters for Texas’s case. The state is “becoming much younger, much more ethnically and racially diverse, and much more urban,” Brandon Rottinghaus, a professor and expert in Texas politics at the University of Houston, told me. “Those voters are more likely to support Democrats.”

Using voting rules to entrench power has historically been a bipartisan exercise, but Republicans are upholding that legacy in Texas right now. The Republican-controlled legislature has used its power to try to add constraints on how Texans can vote, particularly over the past decade or so. “I can definitively say that Texas does not make it easy to vote,” Rottinghaus said. “And it is happening concurrent with massive changes in Texas politics.”

“I know that voters really care a lot about this election,” Chimene, of the League of Women Voters of Texas, said, “And they’re not going to let anything stand in their way of voting in this election.”