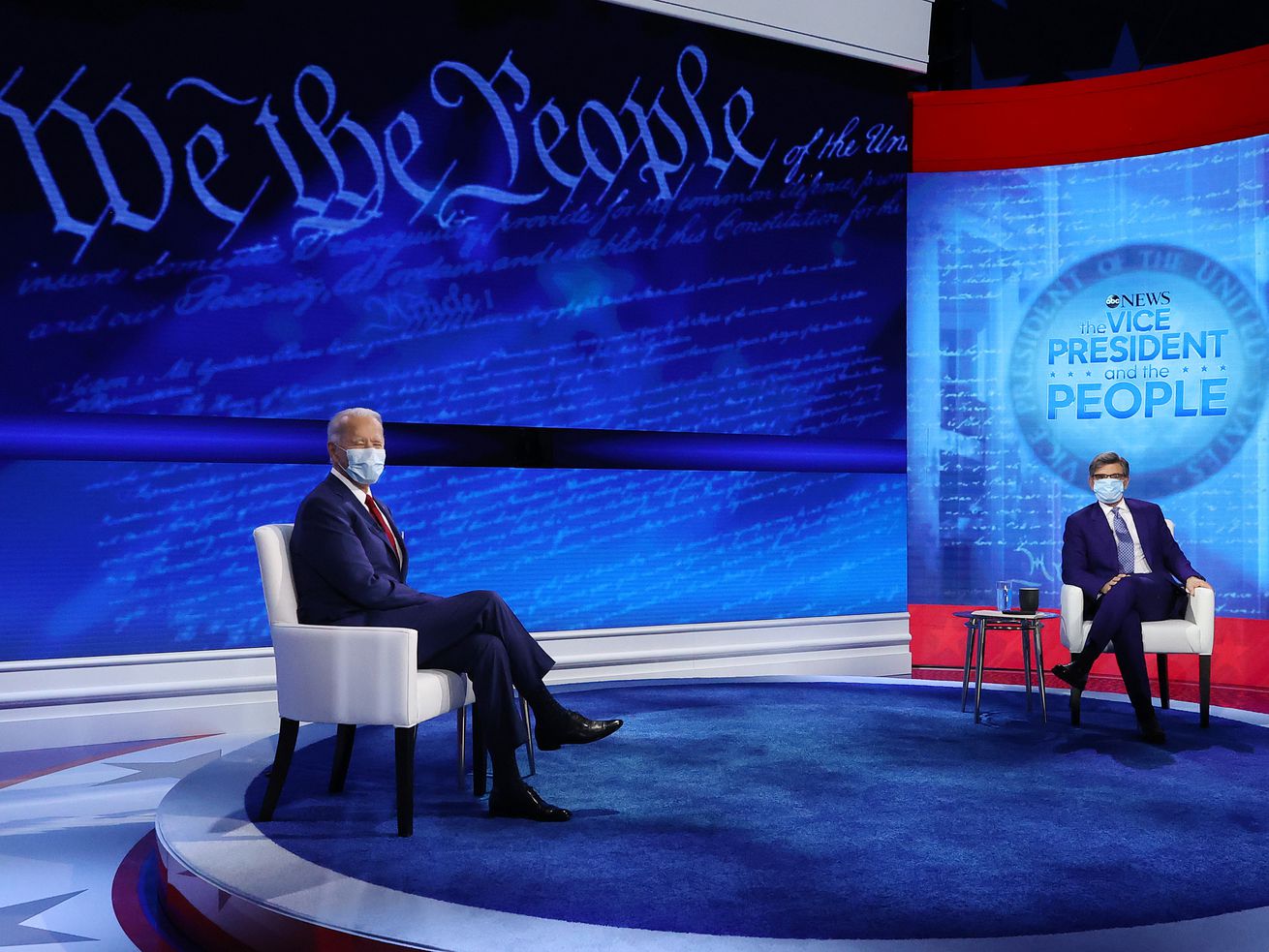 The closest sparks came to flying Thursday night at Joe Biden’s town hall was when the former vice president squared off with George Stephanopoulos over whether or not it would make sense to delay tax increases until the end of the recession.

Biden, who’d read off note cards the precise revenue estimates involved in a 7 percentage point increase in the corporate tax rate and a 2.6 percent increase in the top marginal income tax rate, explained that the way policymaking works is there’s inevitably a congressional negotiation, so he can’t make a specific commitment on timing.

That’s completely true. That is how the government works.

It’s also an extremely boring answer. As was Biden’s citing his desire to change the funding formula of Title I of the Elementary and Secondary Education Act as part of a larger program to help boost opportunities for Black Americans. Or his thoughts on the possibility of using pelletized chicken manure as a biofuel source to reduce the net greenhouse gas emissions of the agriculture sector.

Biden does not do this kind of in-the-weeds policy discussion with the command of detail that we associate with Hillary Clinton, or the mastery of explanation that made her husband famous. And he certainly doesn’t reach the soaring oratorical heights of Barack Obama, who managed to elevate the most banal conversations. Listening to Biden talk about public policy is like listening to, well, a veteran mainstream Senate Democrat. It’s pretty boring.

And after four exhausting years of Donald Trump, it’s an incredible relief.

Joe Biden has a lot of non-inflammatory opinions

Pressed about the 1994 crime bill, Biden explained he thought it was a mostly good bill and also that the political context of 26 years ago, with much higher rates of violent crime, was very different. That said, he agreed the United States had gone too far in terms of incarcerating people — especially for drug crimes. The fault there, he said, is mostly at the state rather than the federal level, but his criminal justice plan would try to roll it back.

He said he doesn’t want to defund police, but does want to reform a lot of aspects of how policing works. He says most cops are good cops and good cops hate bad cops.

Biden wants to raise taxes but only on the rich.

On the coronavirus pandemic, he was asked whether he’d mandate that people take a vaccine. He said the way the government handles the vaccine is going to have to depend on specific elements of the factual situation, so what he’d do in the first instance is try to work on logistical issues related to distribution. He wants everyone to wear masks, but concedes you probably can’t do a federal mask mandate, so in practice he’d do a lot of meetings with governors.

Pressed on expansion of the Supreme Court, he said he doesn’t love the idea but also didn’t entirely rule it out.

Stephanopoulos was clearly a bit frustrated at times at Biden’s somewhat mealy-mouthed responses. But there was nothing wrong with the answers. They just weren’t very newsworthy. Biden’s policy positions have been articulated for months, but evidently not everyone in America has already read Vox’s full set of explainers, so they had some questions about them. So then Biden answered them.

No news was made, and all of Biden’s views themselves are kind of boring and typical. You could imagine him doing a lot of events like this and most people not finding them very interesting.

The dirty secret of Donald Trump’s often contentious relationship with the American press is that he’s been great for business.

Any time you point a camera at Trump, something crazy might happen. He goes on television and insists that his attorney general prosecute his political opponents. Biden, asked about legal accountability for Trump-era misdeeds, said it would be inappropriate for the president to be making that kind of decision. He tries to take contentious flashpoint issues, and smother them in reasonableness and a broad sense of public decency. As a journalist whose job involves trying to write articles people read I was, frankly, sad to have been assigned to watch the Biden town hall, which was just not that interesting.

Biden is the opposite of Trump here; talking policy, a little in the weeds, reminding viewers he was in Congress. Long answers. Stephanopoulos stepping in from time to time. But if you are watching Trump — no reason to change channels

But as a citizen, it was tremendously reassuring.

Biden promises a higher minimum wage, more rigorous environmental enforcement, and a genuinely historic campaign against child poverty, which could fall by 74 percent if his program were fully implemented. But he also promises a future in which a live camera pointed at the president of the United States might be a dull occurrence that nobody particularly wants to cover and only hardcore political junkies would be interested in watching.

An America where politics and reality television could go their separate ways, leaving the business of governing the country to be done with some modicum of calm and dignity with leaders who try to address problems rather than putting out fires of their own making.

Met Office weather warning: Up to 5 inches of torrential rain to batter Britain THIS WEEK
54 mins ago
Lockdown backlash: Sale of sanitary products BANNED by Welsh government, says Tesco
54 mins ago
Free school meals POLL: Should Boris U-turn and fund holiday food for vulnerable kids?VOTE
54 mins ago
Prince Harry says Britain needs to take a ‘long, hard look’ at itself in stern warning
54 mins ago
Prince Harry admits ignorance to unconscious racial bias due to Royal Family ‘upbringing’
54 mins ago
Antarctica: ‘Spooky’ British base ‘untouched in 50 years’ explored after scientists fled
54 mins ago
‘If I was Britain I’d walk away’ – EU turned on Michel Barnier for Brexit ‘aggression’
54 mins ago
Prince Harry rages at politicians ‘pushing against’ BLM: ‘This is NOT up for debate!’
54 mins ago
Don’t forget us! Ireland begs EU for compromise as Dublin FINALLY realises economic threat
54 mins ago
Brexit trade deal: Boris Johnson given simple method to strike lucrative deal with EU
54 mins ago
In rural America, resentment over COVID-19 shutdowns is colliding with rising case numbers
55 mins ago
Why mixed messaging can erode trust in institutions
56 mins ago