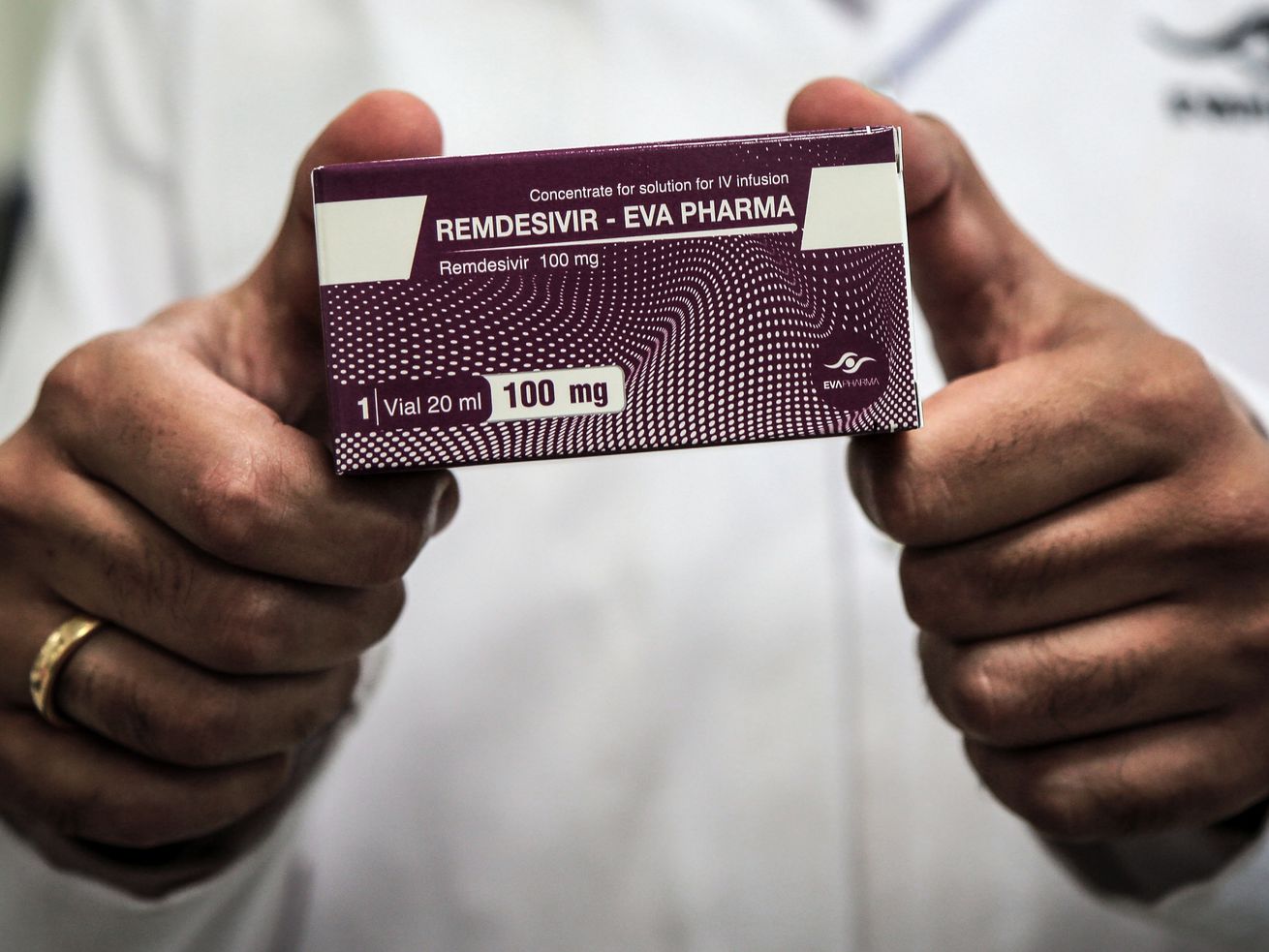 Researchers are concerned the FDA’s first full approval of a Covid-19 drug doesn’t have enough research behind it.

The Food and Drug Administration on Thursday gave its first full approval for a drug to treat Covid-19 to the antiviral remdesivir. But some researchers say the FDA is once again promoting a Covid-19 therapy based on shaky evidence.

Developed by Gilead Sciences and marketed under the brand name Veklury, remdesivir previously received emergency use authorization (EUA) from the FDA in May, which allowed it to be used to treat patients with severe Covid-19. In August, the FDA relaxed its guidelines to allow the drug to be used in less serious cases. President Donald Trump also took the drug as part of his treatment when he was diagnosed with Covid-19 earlier in October.

Full FDA approval promotes remdesivir to the standard of care for hospitalized patients, and other potential treatments for Covid-19 will now have to be compared to it during clinical research.

“Today’s approval is supported by data from multiple clinical trials that the agency has rigorously assessed and represents an important scientific milestone in the Covid-19 pandemic,” FDA commissioner Stephen Hahn in a statement Thursday. The FDA based its decision on three randomized controlled trials. (The largest of those looked at 1,062 hospitalized patients.) The trials’ results showed that remdesivir reduced the length of hospital stays in some Covid-19 patients.

However, shortly before the approval was granted, a study from the World Health Organization announced preliminary results that found the drug had no effect on mortality and — unlike the FDA’s findings — negligible effects on how long patients were in hospitals. The study, known as the Solidarity Trial, recruited almost 12,000 patients, making it the largest Covid-19 treatment study in the world thus far. Researchers say the findings should have given the FDA pause.

“I think it’s really inappropriate to give this a full approval because the data don’t support it,” said Eric Topol, a professor of molecular medicine at the Scripps Research Translational Institute. “What [the FDA] should have done instead of issuing the approval was put on the brakes.”

Absent a vaccine, doctors are desperate for an effective treatment for Covid-19, and the FDA’s approval of remdesivir finally gives them an option. In the United States, Covid-19 case counts are rising again, with states like Wisconsin opening field hospitals to deal with a looming surge.

But the approval of remdesivir has raised concerns, not only because of the results of the WHO’s trial but also because it follows a number of questionable FDA authorizations for other Covid-19 therapies that appear to have been influenced by political pressure from the White House.

Now some researchers and doctors are concerned that remdesivir could not only be less effective than promised, but that its approval could also undermine other efforts to develop better Covid-19 therapies.

Remdesivir seems to be most effective relatively early on for hospitalized patients with severe Covid-19. To help beat back the illness, it interferes with how SARS-CoV-2, the virus that causes Covid-19, makes copies of itself. The virus uses genetic instructions in the form of RNA, written in a code made of molecules represented by the letters A, U, G, and C. The drug mimics the molecule represented by A, adenosine. The fake adenosine blocks the virus from copying itself but doesn’t fool human cells. The result is the virus can’t reproduce as much within a patient’s body.

The antiviral drug was originally developed to treat the Ebola virus, and it has received a hefty investment from the US government over almost two decades, as Ekaterina Cleary, lead data analyst and research associate at the Center for Integration of Science and Industry, wrote in a piece for Stat News:

Research from the Center for Integration of Science and Industry, with which I am affiliated, determined that between gathering knowledge behind remdesivir’s chemical structure and molecular target, the NIH invested as much as $6.5 billion between 2000 and 2019.

Remdesivir treatment is not without risks. It has been shown to cause some side effects in some people, such as elevated liver enzymes, which could indicate liver damage. The drug can also trigger allergic reactions, resulting in fever, shortness of breath, wheezing, swelling, low blood oxygen, and changes in blood pressure.

For a patient with private insurance, the intravenous drug can cost $3,120 for a five-day course of treatment.

Antivirals like remdesivir are most effective early on during the progression of Covid-19, when most of the damage is being done by the virus itself. It’s less effective in later stages, when the problem isn’t just the virus. “The severe manifestations of the disease are caused by an out-of-control immune response to the infection,” said Angela Rasmussen, a virologist at the Columbia University Mailman School of Public Health.

If the immune system gets riled up, it can cause a lot more destruction than SARS-CoV-2 and require more-drastic interventions like intubation, at which point another approach is needed. That’s a big reason why corticosteroids like dexamethasone, which tamp down on the immune system, are the only drugs so far reliably demonstrated to actually reduce Covid-19 mortality.

But giving a patient steroids too early in an infection could prevent the immune system from mounting an effective response against SARS-CoV-2.

Coming up with an effective treatment regimen requires delicately balancing where a patient is in the course of their coronavirus infection and how severe their illness has become. But given how murky it is to identify an infection to begin with — let alone confirming the diagnosis and starting the correct treatment during the appropriate window — researchers have a hard time teasing out what interventions work best.

That’s why carefully controlled, large-scale clinical trials are so important. And with mixed results coming from the studies conducted to date, some scientists don’t think the evidence for remdesivir’s effectiveness is enough for the FDA to grant approval.

“I was really surprised when I saw that news,” Rasmussen said.

The FDA has already made some controversial decisions around Covid-19 drug treatments. The agency granted an EAU for the anti-malaria drug hydroxychloroquine in March, after Trump called it a “game changer.” The FDA revoked the EUA in June, saying hydroxychloroquine was “unlikely to be effective” and could cause lead to heart problems.

Then in August, the agency granted an EUA for convalescent plasma to treat Covid-19. But the National Institutes of Health said the evidence used by the FDA was “insufficient.”

There is more evidence that remdesivir works compared with that of convalescent plasma, but that’s not saying much. “It’s not as weak as the case for plasma, but that’s no standard. The case for plasma is nonexistent,” said Jeremy Faust, attending physician in emergency medicine at Brigham and Women’s Hospital in Boston and an instructor at Harvard Medical School. “There is actually randomized controlled trial data that suggests [that] for a subset of patients, remdesivir can decrease hospital length of stay.”

The strongest results in favor of remdesivir show that patients who received it had a median recovery time of 10 days, compared to 15 days for those who took the placebo. It’s a significant effect, but it’s not huge, and it’s certainly not a cure for Covid-19, nor a way to guarantee fewer deaths.

Faust said one of his concerns with the FDA’s remdesivir approval is a phenomenon known as indication creep, in which a treatment shown to work in only a limited set of circumstances gets prescribed to more and more people. The worry here is that remdesivir, which is approved only for Covid-19 patients over 12 years old who required hospitalization, could start being used in patients with milder Covid-19 illness, or in more severe cases past the point where it could be effective.

“What will happen, I guarantee, is people will start to use the medication more than they need it,” Faust said. Since the course of treatment is five days, it could also extend the length of hospital stays in patients who would otherwise be discharged earlier, saddling them with unnecessary costs.

Another concern is that the approval of remdesivir, especially with such mixed evidence for its effectiveness, could undermine further research.

Topol noted that with remdesivir now as the only fully approved standard of care, it becomes much more difficult to conduct studies on other therapies because they now have to be compared against remdesivir and a placebo.

That raises the cost and complexity of trials, delaying results. Such comparisons are worthwhile if the standard of care is effective, but it adds unnecessary complications if it’s not.

It also makes it harder to recruit people for subsequent clinical trials of the drug to better validate its effectiveness. People may be more reluctant to sign up for a trial where they could get a placebo when they know they could get the actual drug.

“The biggest, most serious problem is that we won’t get to the truth,” Topol said.

It’s worth noting that remdesivir could still be a viable treatment for Covid-19, but the evidence presented so far is contradictory and more investigation is needed to clarify its effectiveness. So why did the FDA go ahead with its approval, then?

It’s hard to say, but Herschel Nachlis, a research assistant professor of government at Dartmouth College, suggested the approval might be a strategic move by the agency to deflect political pressure away from the all-important Covid-19 vaccination campaign. There is no evidence the White House is interfering with the vaccine-approval process directly, but Trump has linked a vaccine to his election prospects and blamed the FDA for holding it back. The appearance that a Covid-19 vaccine was rushed to meet political needs could make people reluctant to get vaccinated, so regulators are keen to distance themselves from the 2020 election campaign.

“If, in the short term, approving remdesivir gives the President a win and alleviates some pressure on the agency from the President about vaccines, that helps buy the FDA important time,” Nachlis told Vox in an email. “It might be another case, like convalescent plasma, of giving up some ground in a battle to put yourself in the position to be able to win the broader war.”

Whether Nachlis’s hypothesis is correct isn’t yet known. But what is clear is that the evidence on remdesivir’s effectiveness appears to be mixed, which is why it would have been helpful for the FDA to have held a public advisory committee meeting to discuss the evidence, a step it typically takes for full pharmaceutical approvals.

Since it may be months before a vaccine for Covid-19 is available, treatments are still urgently needed — and other approaches are being studied. Trump, for example, also underwent a course of an experimental monoclonal antibody therapy from the company Regeneron when he was treated for Covid-19. There are multiple clinical trials of these drugs underway, but now they have competition.