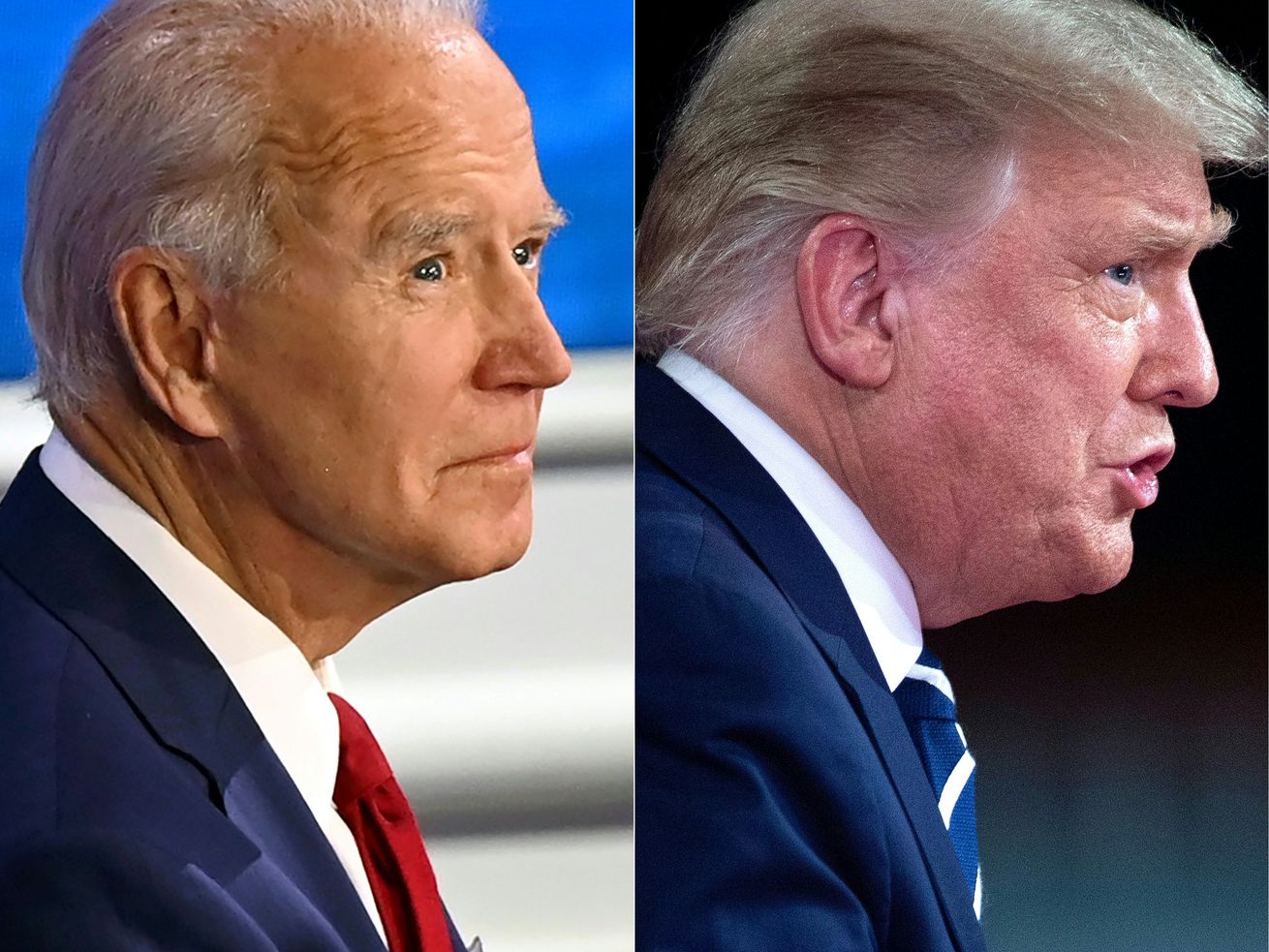 The contrast between the dueling NBC/ABC town halls featuring President Donald Trump and Democratic presidential nominee Joe Biden was nicely captured by the difference between what each of them was saying at 8:13 pm Eastern time.

On NBC, Trump was getting angry as host Savannah Guthrie grilled him on his reluctance to disavow white supremacist groups and dangerous conspiracy theories. He finally did so after repeated questioning. But asked specifically to categorically condemn QAnon — “this theory that Democrats are a satanic pedophile ring and that you are the savior of that,” as Guthrie described it — Trump refused.

“I know nothing about QAnon,” Trump began, adding later: “What I do hear about is they are very strongly against pedophilia, and I agree with that, I do agree with that.”

So not only did Trump refuse to denounce a dangerous conspiracy theory whose proponents are part of his base, but he embraced some of its ideology. Here’s the clip:

At the very moment Trump was making that display, Biden on ABC was talking about the importance of wearing masks and following public health measures endorsed by experts to slow the spread of the coronavirus.

“When a president doesn’t wear a mask, or makes fun of folks like me when I was wearing a mask for a long time, then people say it mustn’t be that important,” Biden said. “If you listen to the head of the CDC, he stood up and he said, ‘You know, while we’re waiting for a vaccine’ — he held up a mask — ‘you wear this mask, you’ll save more lives between now and the end of the year than if we had a vaccine.’”

At the same moment that Trump was refusing to disavow QAnon, Biden on ABC was saying that “when a president doesn’t wear a mask, or makes fun of folks like me when I was wearing a mask for a long time, then people say it mustn’t be that important.” A jarring contrast. pic.twitter.com/rqppKQDUrs

Viewers who flipped from NBC to ABC in time for Biden’s comments about masks might have experienced whiplash. That’s because minutes earlier, Trump defended his ongoing reluctance to wear masks in public — a reluctance that’s persisted even after he was hospitalized with the coronavirus — with a lie about how “just the other day they came out with a statement that 85 percent of the people that wear masks catch [coronavirus].”

But as Guthrie pointed out, Trump’s statement about masks wasn’t close to accurate. He was referring to a Centers for Disease Control and Prevention study that details how dining out increases the risk of a coronavirus infection even among people who report regularly wearing a mask. It does not indicate that 85 percent of people who wear masks get Covid-19.

None of this is to say that Biden’s performance was perfect. Later on, he admitted that his support for 1994 crime legislation that resulted in disproportionate sentences for people of color was a mistake, but passed blame, saying, “the mistake came in terms of what the states did locally.”

But if Biden’s reluctance to fully own up to the role he played in mass incarceration wasn’t a shining moment for him, it still represented quite the contrast with Trump, who at that same moment on NBC was blatantly lying about his record on health care.

In a way, the competing town halls threw the stakes of the 2020 election into starker relief than another Trump-Biden debate would have. Despite his faults, Biden came across as thoughtful and able to engage with policy substantively. Trump, by contrast, wouldn’t even acknowledge that his propensity for retweeting obviously false conspiracy theories is irresponsible, let alone accept any responsibility for the tough shape the country finds itself in after four years of his leadership and amid a pandemic he’s seemingly given up trying to contain.

The President provides a strange defense of his retweeting of a Seal Team Six conspiracy theory pic.twitter.com/3TrCRwF5Au

Like a train wreck, it can be hard to look away from Trump. But as my colleague Matthew Yglesias writes, after four years of regular derailments, there’s something delightful about Biden’s boringness.

Do we have to toss Halloween out the window this year, too? Public health experts give some guidelines
3 hours ago
Kushner friend arrested on cyberstalking charges
3 hours ago
Former Mueller deputy predicts Trump will pardon himself if he doesn’t win reelection
3 hours ago
Trump’s stance on coronavirus stimulus shifts ‘on an hourly basis,’ Sen. Chris Murphy says
3 hours ago
Bolivia’s Arce pledges to “rebuild” as landslide election win confirmed
3 hours ago
Arnold Schwarzenegger undergoes successful heart surgery: ‘I feel fantastic’
3 hours ago

Do we have to toss Halloween out the window this year, too? Public health experts give some guidelines
3 hours ago
Kushner friend arrested on cyberstalking charges
3 hours ago
Former Mueller deputy predicts Trump will pardon himself if he doesn’t win reelection
3 hours ago
Trump’s stance on coronavirus stimulus shifts ‘on an hourly basis,’ Sen. Chris Murphy says
3 hours ago
Bolivia’s Arce pledges to “rebuild” as landslide election win confirmed
3 hours ago
Arnold Schwarzenegger undergoes successful heart surgery: ‘I feel fantastic’
3 hours ago
Jennifer Aniston endorses Joe Biden, says ‘it’s not funny to vote for Kanye’
3 hours ago
Kristin Cavallari sent Stephen Colletti her cookbook and made the best ‘Laguna Beach’ joke
3 hours ago
Sacha Baron Cohen: ‘It was pretty clear to us’ what Rudy Giuliani did in new ‘Borat’
3 hours ago
Matthew McConaughey on his 1999 nude bongo arrest: ‘F**k, yeah, I resisted’
3 hours ago
Ireland Baldwin uses ‘I voted’ stickers as pasties in topless photo urging people to vote
3 hours ago
Lily James Was “Shocked” After Dominic West and Catherine FitzGerald Refuted Split Rumors
3 hours ago