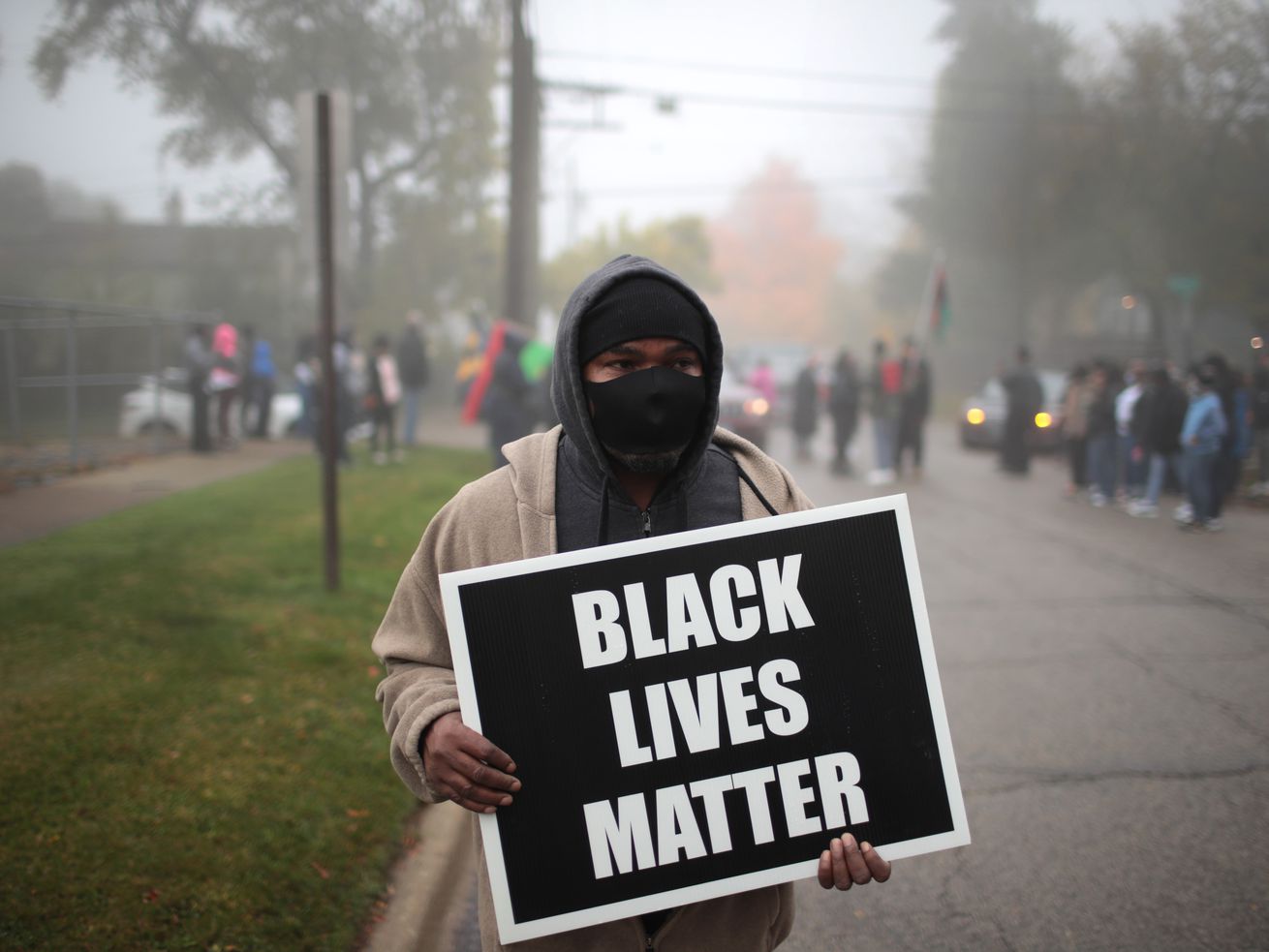 Trevor Williams, the father of Tafara Williams, marches with demonstrators in Waukegan, Illinois, on October 22, to protest the police shooting of his daughter and her boyfriend. | Scott Olson/Getty Images

Stinnette died from his wounds and Williams is recovering in the hospital. The FBI is investigating.

On the evening of Tuesday, October 20, a police officer opened fire on an unarmed Black couple who were inside their car in Waukegan, Illinois, a city just north of Chicago. The officer killed 19-year old Marcellis Stinnette and badly injured his girlfriend, 20-year-old Tafara Williams, who remains in the hospital.

The officer who shot Williams and Stinnette — a Hispanic, five-year veteran of the Waukegan police department who remains unidentified — was fired late Friday, according to Waukegan Chief of Police Wayne Walles. The shooting is being investigated by the Illinois State Police, and the Federal Bureau of Investigation is also reviewing it, according to a statement from the local prosecutor, Lake County State’s Attorney Michael Nerheim.

The federal investigations were called for by demonstrators led by the Stinnette and Williams families, who have also demanded that local authorities release footage of the incident to the public.

“The police cannot police the police. They cannot investigate. And they cannot give us fair justice if it’s one of their own. And yes, we are seeking justice for Marcellis Stinnette,” Satrese Stallworth, a relative of Stinnette, said at a rally in front of the Waukegan city hall Thursday afternoon.

And the Waukegan shooting comes just days after the third-degree murder charges for Derek Chauvin, the police officer whose killing of George Floyd in Minneapolis sparked this summer’s national wave of protests, were dismissed.

“All of our families are standing together — we are one family and we are united,” Letetra Widman, Blake’s sister, said at the rally Thursday. “We will not allow you all to just treat them like they’re nothing, just because they didn’t have a viral video, just because their name isn’t in lights. We’re going to share this spotlight.”

What we know about the shooting

While the Waukegan Police Department has confirmed that body and squad car camera footage of the shooting does exist, they say it will not be released to the public until after a full investigation takes place — a process that could take weeks or months to complete. Most of the information available about the shooting comes from the police department, the surviving victim, and a handful of witnesses.

According to the Waukegan police, the encounter began at 11:55 pm CT on October 20, when authorities received a report of a suspicious vehicle (according to the victims’ families, the couple was sitting inside their car outside Williams’s mother’s home). Williams was behind the wheel, and Stinnette was in the passenger’s seat. Police say an officer attempted to investigate the car when the vehicle unexpectedly fled the scene.

Shortly afterward, a different police officer spotted the car about half a mile away. The officer exited their patrol vehicle, and began walking toward the car. At that point, the police say the couple’s car reversed toward the officer, who, “in fear for his safety,” opened fire into the car with his semiautomatic pistol. The police did not describe how far the officer was from the car, how fast it was moving, or any other details of the shooting, except the fact that no weapons were found inside the car.

Stinnette and Williams were both shot and rushed to a local hospital, where police say Stinnette died shortly thereafter. Williams, who was shot in the stomach and hand, did not sustain life-threatening injuries and continues to receive treatment for her wounds.

Darrell Mosier, a witness to the shooting, recounted a somewhat different version of events, suggesting that Williams had no intention of harming the officer, and that she was merely panicked.

“The police officer got out of the car,” Mosier recalled. “When he told them to stop, he told her to stop, she was scared. She put up her hands, she started yelling, ‘Why you got a gun?’ She started screaming. He just started shooting.”

The families of Stinnette and Williams, and Williams herself, have also challenged the police department’s account of the shooting.

Civil rights attorneys Ben Crump and Antonio Romanucci — the same lawyers who are representing the families of George Floyd and Daniel Prude, a Black man who died after a police encounter in Rochester, New York — have agreed to represent Tafara Williams.

In a statement released Saturday, the lawyers said the quick action of the Waukegan Police Department in firing the officer was a result of the nationwide movement for police reform, calling it a “first step in police accountability.” They also promised their own investigation into the shooting.

Crump tweeted on Friday that his team would share its findings when the investigation is complete. “We have seen over and over that the ‘official’ report when police kill Black people is often missing or misrepresenting details,” he wrote.

Tafara Williams has retained @BenCrumpLaw regarding this encounter w/ police. We have seen that the ‘official’ report when police kill Black people is often missing or misrepresenting details. We will share our findings when we have uncovered the truth. https://t.co/WIQItSHJiH

The shooting of Williams and Stinnette is under investigation

Waukegan police said Friday that the unidentified officer who shot Williams and Stinnette has been fired for “multiple policy and procedure violations.” The police officer who initially approached the vehicle, identified only as a white man with five years at the department, has been placed on administrative leave pending the results of the Illinois State Police (ISP) investigation.

Michael Nerheim — the state attorney for Lake County, where Waukegan is located — announced late Friday that the US Department of Justice will assist the state of Illinois in the investigation of the shooting of Williams and Stinnette. The Justice Department oversees the FBI, which Nerheim said will review the shooting.

“I am confident in the work being done by the Illinois State Police and welcome the assistance of the FBI,” he said. “As I have said before, once the investigation is concluded, all the evidence will be reviewed and a final decision will be made with respect to any potential charges.”

But on Thursday, demonstrators organized by the Lake County chapter of Black Lives Matter and led by the families of Stinnette and Williams, criticized the decision to leave the investigation solely up to the ISP, arguing that federal oversight was necessary. A 2018 investigation by Chicago public radio station WBEZ and the Better Government Association into 113 suburban police-involved shootings found that the ISP’s investigations took an average of 17 months and almost never found the officer to be at fault.

Stallworth, Stinnette’s relative, told reporters on Friday the family is hopeful about the Department of Justice’s involvement.

“They were grateful, because we didn’t want the police handling this,” she said. At the same time, Stallworth said the family also wants the Illinois attorney general’s office to handle the case, not Nerheim’s office, to ensure the case proceeds fairly and independently.

Clyde McLemore, the president of the Lake County Black Lives Matter chapter which organized Thursday’s rally in Waukegan, says the organization is planning a second, much larger, demonstration on Saturday, October 24, to demand that a different prosecutor be brought in and that the officer’s body camera and squad car footage be released to the public. McLemore said he hopes that this case can provide the sort of accountability so often lacking when police officers kill Black citizens.

At the same time, the victims’ families have acknowledged that the shooting of Williams and Stinnette — and the response to it — is about a lot more than one incident. “We would like justice,” said Zhanellis Banks, Stinnette’s sister. “But we also would like police reform.”