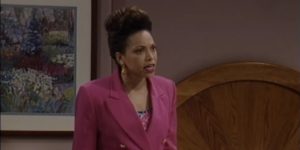 Martin is arguably one the top tier Black sitcoms from the 1990s.

Tisha Campbell, who famously plays Gina Waters on the show, did an interview with Entertainment Tonight and spoke about the series cultural impact.

The actress talked about her reconciliation with Martin Lawrence after divorcing her ex-husband, Duane Martin, in 2018. “I hadn’t seen him since the last day of the show, and I literally screamed. I was like, ‘I’m so happy to talk to you.’”

Tisha didn’t dish on the details of their feud but she added, “That will always stay private. And all I know is that at the end of it, we are so good. We are just supportive of one another, supportive of each other’s families. We talked, it’s all good.”

But she did reveal the cast is “trying to” to push for a reboot. ” It’s so hard to say,” she continued.

Tisha Campbell explained their busy schedules and Tommy’s passing is going to make a reboot difficult.

“One, Tommy’s not here. And the other thing is the schedule. It literally falls down to schedule. Every single one of us, thank God, is still working.”

She continued, “We made an impact and it was a big thing for us. And I do not take it lightly. I’m still grateful that I could ease and heal people with laughter.”

Are you here for a Martin reboot?

Scientists create perfect ‘electronic skin’ capable of stretching 28 TIMES original form
1 hour ago
Prince Charles continues to ignore backlash from The Crown as he launches new campaign
1 hour ago
The US was already setting Covid-19 records. Experts say Thanksgiving could have made things worse.
1 hour ago
Trump’s first interview since losing reelection was a smorgasbord of disinformation
1 hour ago
Billionaire Israel Englander Pours Money Into 2 “Strong Buy” Stocks
1 hour ago
Five Energy Stocks To Buy Before Christmas
1 hour ago