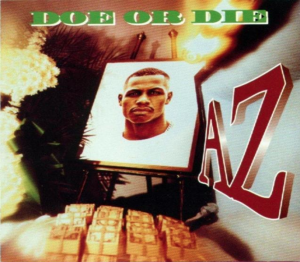 On this date in 1995, Antonio Cruz aka AZ from Nas’ “Life’s A Bitch” fame, released his debut album Doe Or Die on EMI Records.

Produced by legendary producers Pete Rock, DITC’s Buckwild, LES, D.R. Period as well as AZ himself, AZ was able to land the deal for this album strictly off of the classic verse he spit on the third track on the iconic Illmatic album.

Tracks sucks as the Pete Rock propelled “Rather Unique”, the dreamy “Sugar Hill”, which features then-unknown songbird Miss Jones and the street fueled “Mo Money, Mo Murder, Mo Homocide” gave this album a verbal variety that was rarely heard, especially from an emcee who was only known at the time for a guest appearance.

A special salute to AZ for holding it down for dolo for an entire quarter of a century, even managing to orchestrate a 15 year anniversary of the album in 2010 on his own Quiet Money imprint, featuring production from the likes of Statik Selektah and Fame of M.O.P.