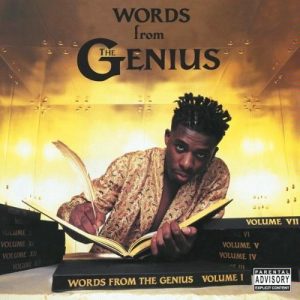 On this day exactly three decades ago, Wu-Tang Clan member GZA released his debut, pre Wu-Tang album Words From the Genius. This album was one of two pre Wu-Tang Clan albums from one of the members, the other being Ooh, I Love You Rakeem EP from RZA (then called Prince Rakeem).

This album was originally released under Cold Chillin’ Records. When asked about this release in an interview, GZA recalled:

“I was signed to Cold Chillin’ ’bout five years ago. They put out an album but didn’t promote it. They tried to put it out again last year [1994] after everything happened with the Clan, put a ’94 date on it, but still didn’t put any money behind it, so it didn’t sell twice. I’m still proud of it, though. The beats ain’t all that , but lyrically, s*** was bangin’. So it wasn’t all peaches and cream, but I was determined to break though. A quitter never wins, and a winner never quits. “

As GZA stated the album was re-released in 1994 with a updated track list and again in 2006 as an expansion version under Traffic Entertainment Group, the owner of majority of Cold Chillin’ Records’ catalog.

This particular project was not the usual hardcore, heavy sampled, Shaolin sound that any Wu-Tang fan would be accustomed to. The beat selection on this project is more leaning toward the classic boom-bap sound of the early 90s. His lyricism however is just as sharp as ever. The subject mater of this project is true to the name. GZA spits pure knowledge and righteousness regarding to everyday situations of an individual living in the projects of New York.

After this project, GZA went on to join the Grammy Award winning rap group Wu-Tang Clan, formed by his cousin RZA. He continued to have a successful career releasing six studio albums.

Salute to GZA for this piece of Hip Hop history!

10 years after Fukushima, safety is still nuclear power’s greatest challenge
17 mins ago
The oil industry says it might support a carbon tax – here’s why that could be good for producers and the public alike
17 mins ago
Senate approves sweeping coronavirus measure in partisan vote
17 mins ago
Marjorie Taylor Greene’s delay tactics frustrate GOP
17 mins ago
Veteran Marathi actor Shrikant Moghe dead
17 mins ago
Manipur cyclist sets out on campaign to raise funds to feed the hungry
17 mins ago