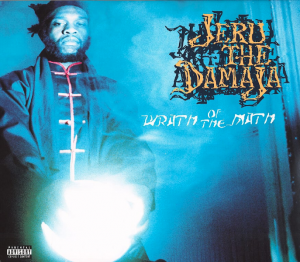 On this date in 1996, Gangstarr Foundation representative Jeru The Damaja of the Dirty Rotten Scoundrels dropped his sophomore LP Wrath Of The Math on the Payday/Polygram imprint.

Serving as a continuation from his debut album The Sun Rises In The East, Jeru’s second album contained more of the social consciousness in his lyrical content as on The Sun album, complete with part two to the “Can’t Stop The Prophet” saga in his fight against “Mr. Ignorance.” Produced exclusively by behind the boards legend DJ Premier, Wrath Of The Math was the perfect combination of intelligence, lyrical dexterity and head-bangin’ production.

Some of the key tracks that propelled the album include “One Day”, where Jeru hypothetically went to Puff Daddy and Suge Knight in an attempt to save Hip-Hop, “The Bullshit”, an imaginary ode to studio gangsters, “Physical Stamina”, which features the album’s only guest appearance by Afu-Ra and the project’s trademark track “Ya Playin’ Yaself”.

Salute to Jeru, Premier, DRS, the Gangstarr Foundation and the whole East New York for this timeless piece of Hip Hop history!

The post Today in Hip-Hop History: Jeru The Damaja Releases ‘The Wrath Of The Math’ 24 Years Ago appeared first on The Source.

Kate Middleton and William share emotional moment with new TV friend during latest outing
5 hours ago
Royal Family BANNED from singing national anthem on Remembrance Day over COVID fears
5 hours ago
UK weather forecast: Met Office issues ‘danger to life’ warning as Storm Aiden strikes
5 hours ago
Police make arrests as FURIOUS Muslims protest against French Muhammed cartoons in London
5 hours ago
Anti-lockdown riots explode across Europe – police attacked in Burgos and Florence
5 hours ago
Coronavirus horror: Boris Johnson to announce second NATIONAL LOCKDOWN next week
5 hours ago
Rishi Sunak’s ‘vital lifeline’ for Britons in the run up to Christmas
5 hours ago
Spain in chaos: Police RUN OVER protestor in Barcelona as angry locals launch SMOKE BOMBS
5 hours ago
SNP civil war: Humiliation as ‘Plan B’ for Scottish independence shut down by OWN party
5 hours ago
EU sues UK in bizarre legal threat – outrageous letter demands UK play by Brussels rules
5 hours ago
What Day of the Dead tells us about the Aztec philosophy of happiness
5 hours ago
What it’s like to lose a presidential election
5 hours ago