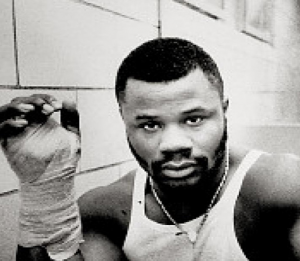 Some say he was 50 Cent before 50 Cent. Some called him “the Robin Hood of The Ghetto”, while the establishment dubbed him “the crack city terminator.” In the hood, his solution is considered the only possible answer to a continuous epidemic of police brutality. Some of your favorite rappers from French Montana to Lloyd Banks to Jay-Z have name-dropped him on their tracks and BET felt he was so important to American culture that their American Gangster series had to open with him, but only an educated few know why the name Larry Davis continues to ring bells more than three decades after that fateful night in November of ’86.

On this date in 1986, a 19-year-old Bronx man by the name of Larry Davis was engaged in a shootout with over 25 NYPD officers who came after him in what appeared to be a murderous hit. For those that don’t know what makes this such a unique story is that Davis not only survived but escaped unharmed long enough to tell his story to the FBI. Larry Davis was acquitted of the police shootings(six officers were critically injured), which was the only time anyone was acquitted for shooting an officer of the law in U.S. history.

READ MORE: The Death Of Larry Davis 10 Years Later: Is This The Only Answer To Police Brutality?

Check out the first-hand account from someone who was with Davis on that cold night in the Bronx at Larry’s sister’s apartment on Webster Avenue.

November 19, 1986 is a night that forever changed the course of my life. It was the height of the crack epidemic on this cold winter night when I was meeting with my partner and best friend Larry Davis. We were discussing the trip we were taking the next day to California to avoid the heat he was experiencing from some corrupt cops he sold drugs for. For weeks he had been laying low knowing they had a bounty on his head. At the time no one could be trusted. The police were rolling up on anyone associated with Larry to find out where he was.

On this night, I sat with him in his sister’s apartment discussing our plans for the trip we were taking and making final arrangements with one of my associates to restructure some of the business dealings in the street. Larry was in the process of extricating himself from out of that lifestyle of dealing drugs and we were going to refocus our energies totally toward dealing in music. The decision was made months ago, but became complicated once Larry made his plans known to others and the corrupt cops caught wind of his decision to step off with their money. They then put a bounty on his head.

READ MORE: The Larry Davis Story: Is This The Solution To Police Brutality?

As he was explaining what was going on in the streets to my associate, the associate became very scared and verbalized his fears to us, while asking Larry if he himself was in fear for his life. Larry’s reply, “Well, no I’m not scared. The only person I fear is God… Don’t get me wrong, I don’t wanna die, but if it’s my time to die, then so be it…” At this point I’m ready to tune him out and dismiss his words as Larry just talking mess… But then he continued, “One thing, though, I will say is… if they come and kill me, I guarantee you that before I go, I’m a take one of those pigs down with me.”

Hearing him use the term “pigs” is what really caught my attention. It showed that even in the most negative of situations – having been a drug dealer for a group of corrupt NYC cops – Larry was still in some way affected by the pro-Black organizations that gave birth to our generation. The seeds of their struggles were planted in us whether we knew it or not. And to me, it seems, that on that fateful night of November 19, 1986, the spirit of those freedom fighters, and the spirit of that movement, guided his thoughts and actions and helped him overcome the overwhelming force that came to assassinate him.

What is even more significant and what we must keep in mind while Remembering Larry Davis is that on that night of November 19, 1986, Larry became what famed lawyer William Kunstler called “A symbol of resistance to police violence.”

Brexit deal UP TO THE EU says Britain as anger mounts over Brussels’ ‘changing approach’
5 hours ago
Donald Trump FINALLY accepts defeat as he pledges to leave White House
5 hours ago
Kate set for ‘milestone moment’ as project she’s worked on for years lands results today
5 hours ago
Coronavirus lockdown tiers will be over by Easter, says Boris Johnson
5 hours ago
‘It’s not his money!’ Hubby gatecrashes Lottery call after hearing how much wife has won
5 hours ago
Brexit warning: Red tape means Northern Ireland to miss out on 15percent of M&S food range
5 hours ago

Brexit deal UP TO THE EU says Britain as anger mounts over Brussels’ ‘changing approach’
5 hours ago
Donald Trump FINALLY accepts defeat as he pledges to leave White House
5 hours ago
Kate set for ‘milestone moment’ as project she’s worked on for years lands results today
5 hours ago
Coronavirus lockdown tiers will be over by Easter, says Boris Johnson
5 hours ago
‘It’s not his money!’ Hubby gatecrashes Lottery call after hearing how much wife has won
5 hours ago
Brexit warning: Red tape means Northern Ireland to miss out on 15percent of M&S food range
5 hours ago
Macron sparks fury as he heaps praise on Maradona for defeating ‘Thatcher’s England’
5 hours ago
Good job we left! Hungary and Poland refuse to back down as bitter clash with EU escalates
5 hours ago
Prince Edward steps into Prince Philip’s shoes and honours new patronage in video
5 hours ago
‘Ridiculous!’ McDonald’s defended as chain accused of cultural appropriation over burger
5 hours ago
Trump says he’ll leave White House if Biden declared winner of Electoral College
5 hours ago
Dow Jones Futures Fall On Coronavirus Vaccine News, Bitcoin Dives; Watch Out For This
5 hours ago