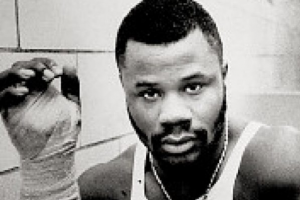 Some say he was 50 Cent before 50 Cent. Some called him “the Robin Hood of The Ghetto”, while the establishment dubbed him “the crack city terminator.” In the hood, his solution is considered the only possible answer to a continuous epidemic of police brutality. Some of your favorite rappers from French Montana to Lloyd Banks to Jay-Z have name-dropped him on their tracks and BET felt he was so important to American culture that their American Gangster series had to open with him, but only an educated few know why the name Larry Davis continues to ring bells more than three decades after that fateful night in November of ’86.

On February 20, 2008, Adam Abdul Hakeem aka Larry Davis, was stabbed to death in Shawangunk State Prison in New York by a fellow inmate after serving 23 years for an illegal weapons charge. Most would say that people die in American prisons daily, so what’s the big deal about another dead prisoner? Well, it must first be explained why Mr. Davis was in prison for so long on a mere gun charge in the first place.

As he said on camera after his capture in 1986, “the police gave me the guns!”, that Davis was finally charged with after being acquitted for shooting 6 NYPD officers. The then 21-year-old BX native’s defense was that he shot the officers in self-defense. Davis exposed that he sold drugs for these Bronx precinct officers, claiming that they wanted to kill him because of what he knew about the drug operation within the department and a Bronx jury believed him. This case was the first and very possibly the only time in American history that a civilian was cleared of all charges in the shooting of a police officer.

The NYPD and then-Mayor Edward Koch were outraged at the outcome. After Larry’s death, the former Mayor Koch was quoted as saying, “The prison system did what the criminal justice system could not.” It’s safe to say that with the endless accusations against the NYPD and other police departments around the country for brutality against Black and brown people, the sentiment of sympathy for Larry Davis has been met with fierce opposition.

With the recent killings of Black youth by police and civilians becoming the norm, the question in the urban community is whether or not Larry Davis’ solution to police brutality is the only option left. With normal citizens being given the option to shoot first and ask questions later when it comes to Black youth and the prison industrial complex as the penalty for defending yourself, the bare truth is that it has become the only option to some. With landmark cases from Emmitt Till to Botham Jean, history reveals that people such as Nat Turner, Denmark Vesey, and even Larry Davis will always be heroes. We’ve heard Larry’s name come from the mouths of everyone from ATCQ to Jay-Z.

Check out Larry’s story on Troy Reed’s Street Stories Larry Davis: A Routine Typical Hit, BET’s American Gangster series and is also rumored to be in the hands of several filmmakers, which could possibly spawn the story on the silver screen.

The post Today in Hip-Hop History: Larry Davis Was Killed in Shawangunk Prison 13 Years Ago appeared first on The Source.

Two Supreme Court cases could destroy what remains of the Voting Rights Act
3 hours ago
Biden’s climate chief Gina McCarthy on mobilizing “armies of people” to cut emissions
3 hours ago
Suze Orman says there’s a retirement crisis — here’s what you can do about it
3 hours ago
Target stock dives as retailer reveals new $4 billion spending spree
3 hours ago
Is Nio Stock A Buy As Chip Shortage Weighs On Outlook?
3 hours ago
Goldman Sachs Predicts Over 50% Rally for These 2 Stocks
3 hours ago

Two Supreme Court cases could destroy what remains of the Voting Rights Act
3 hours ago
Biden’s climate chief Gina McCarthy on mobilizing “armies of people” to cut emissions
3 hours ago
Suze Orman says there’s a retirement crisis — here’s what you can do about it
3 hours ago
Target stock dives as retailer reveals new $4 billion spending spree
3 hours ago
Is Nio Stock A Buy As Chip Shortage Weighs On Outlook?
3 hours ago
Goldman Sachs Predicts Over 50% Rally for These 2 Stocks
3 hours ago
My in-laws are underwater on their mortgage and their home is in disrepair. Should they just walk away and move in with us?
3 hours ago
China warns ‘side effects’ of US economic stimulus risk causing sharp market correction
3 hours ago
Turkey’s reopening relieves restaurants but worries doctors
3 hours ago
Russia will respond to new EU sanctions over Navalny – envoy
3 hours ago
Hospital: SUV carrying 27 crashes with semitruck, killing 15
3 hours ago
Resurgent stock market evokes memories of long-gone bubble on Tokyo’s “Wall Street”
3 hours ago