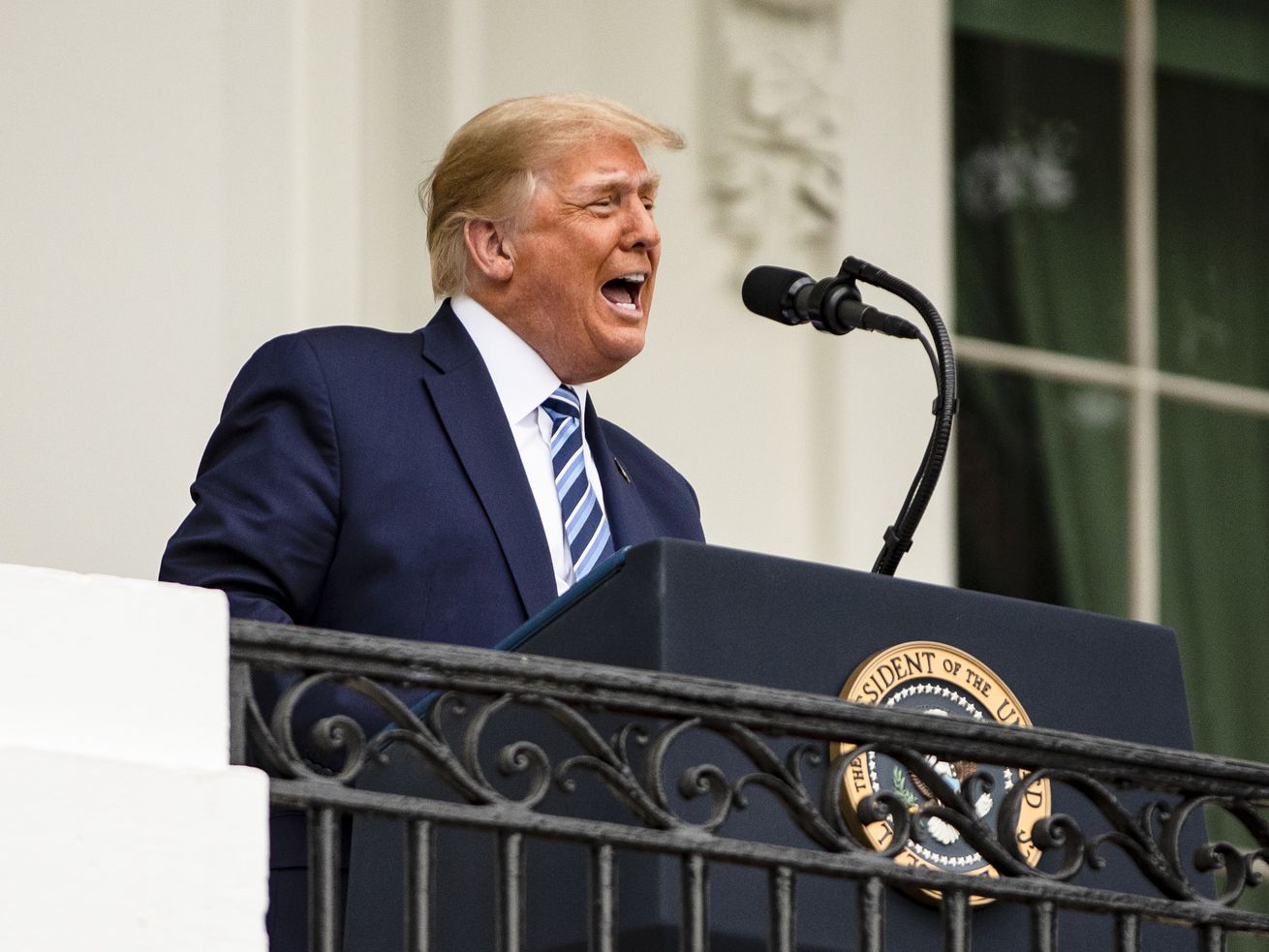 Even Dr. Anthony Fauci isn’t pulling punches about how irresponsible they are from a public health standpoint.

President Donald Trump is rushing to get back on the campaign trail just one week after leaving the hospital, and before it’s even clear that he’s tested negative for the coronavirus. (Minutes before this story was published, Trump’s physician released a letter claiming that Trump “has tested NEGATIVE, on consecutive days, using the Abbott BinaxNOW antigen card.”)

With polling showing the presidential race trending toward a Biden landslide, Trump is scheduled to hold a rally on Monday evening in Sanford, Florida. It will be his first since a trip to Minnesota on September 30 during which White House aide Hope Hicks fell ill with Covid-19, and marks the beginning of what is shaping up to be an extraordinarily intense three weeks of campaigning for the president. Trump has reportedly asked his campaign to schedule in-person events for him every night between Monday and Election Day. One adviser expressed worry to Axios that Trump is “going to kill himself.”

While Trump’s recent TV and radio interviews indicate he’s at least feeling better physically than he was in the days immediately following his October 2 announcement that he tested positive for the coronavirus, the president wants people to believe he’s the first person in the world to test positive and then actually feel better a week later.

During a Sunday morning appearance on Fox News, for instance, Trump claimed without evidence that he’s “immune” to the virus, but didn’t answer a question about what precautions his campaign will take to try to keep people safe at his rallies. Along the same lines, during a separate Fox News appearance, Trump campaign official Lara Trump deflected questions about the safety of Trump holding in-person events.

Chris Wallace has to explain to Lara Trump that two wrongs don’t make a right pic.twitter.com/FstOInSRme

The fact of the matter is it doesn’t appear Trump’s campaign plans to do much. The Centers for Disease Control and Prevention says large gatherings where it’s hard to maintain physical distance from others (like political rallies) present the “highest risk” of becoming spreading events, but the campaign’s response to questions about how they’re flouting government guidance has been to suggest the right of assembly trumps public health.

Rally attendees are still required to sign a waiver absolving the campaign of any responsibility if they contract Covid-19. And early images from Sanford indicate that there won’t be much social distancing or mask-wearing.

Very few masks, no distancing — here’s an image from Sanford, Florida, where Trump is holding a rally later tonight pic.twitter.com/HilF87ceet

While Trump’s event on Monday is scheduled to take place outdoors, that doesn’t mean it’s totally safe. Consider, for instance, the fallout from Trump’s September 18 rally in Bemidji, Minnesota.

The Bemidji rally is perhaps best remembered for Trump praising his almost entirely white audience for their “good genes,” and for the fact that it began right as news broke of Supreme Court Justice Ruth Bader Ginsburg’s death. But it was back in the news late last week after the Minnesota Department of Health (MDH) announced that nine coronavirus cases — including two requiring hospitalization, and one that put a person in the ICU — were linked to it.

While it’s impossible to know for sure that the nine infections were contracted at the rally, MDH spokesperson Doug Schultz told Politico that all nine people “attended the rally during the time when they were likely to have been exposed to the virus that made them ill (i.e. 14 days prior to illness onset).” He added that it’s likely at least one person was infectious at the rally.

Trump’s last rally before he announced his coronavirus diagnosis was held about three hours away from Bemidji in Duluth, Minnesota, on September 30 — about 48 hours before Trump ended up in the hospital with his own coronavirus diagnosis. The MDH sounded the alarm about the Duluth event as well, releasing a statement noting that “Community transmission of COVID-19 was high in St. Louis County prior to this week’s rally, and people attending the rally may have been infectious without realizing it.”

“People should consider getting tested even if they do not have symptoms because some people may not develop or recognize symptoms and people can spread the virus even without displaying symptoms,” the statement added.

Yet on Monday night, the Trump campaign is using unreliable temperature checks to try to identify possible coronavirus carriers. Put it all together and you can understand why Anthony Fauci, head of the National Institute of Allergy and Infectious Diseases, said on CNN on Monday that Trump’s pandemic rallies are a bad idea from a public health standpoint.

“We know that that is asking for trouble when you do that. We’ve seen that when you have situations of congregate settings where there are a lot of people without masks, the data speak for themselves,” Fauci said, adding that the rallies are an extra bad idea right now since new coronavirus cases are again on the rise throughout the country.

“We know that that is asking for trouble when you do that. We’ve seen that when you have situations of congregate settings where there are a lot of people without masks, the data speak for themselves” — Fauci says Trump’s pandemic rallies are bad from a public health standpoint pic.twitter.com/eNV07VMQj6

If you hoped Trump’s coronavirus hospitalization might cause him to rethink the wisdom of holding rallies during a pandemic, he dispelled that even before he left Walter Reed medical center with a tweet in which he advised people, “Don’t be afraid of Covid. Don’t let it dominate your life.”

I will be leaving the great Walter Reed Medical Center today at 6:30 P.M. Feeling really good! Don’t be afraid of Covid. Don’t let it dominate your life. We have developed, under the Trump Administration, some really great drugs & knowledge. I feel better than I did 20 years ago!

But that talking point is cold comfort to loved ones of the nearly 215,000 Americans who have lost their lives to Covid-19, not to mentions the thousands of others who survived with damaged health. And as CNN detailed on Monday, the latest case numbers indicate things are trending in the wrong direction:

The virus is now trending up in 31 states and is receding in only three, according to Johns Hopkins University. On Saturday alone, there were more than 54,000 new infections recorded with a further 618 deaths. The high baseline of cases means that a coming spike could be even more serious than the viral storm that raged through the northeast and the south in the spring and summer.

The latest forecast from the Institute for Health Metrics and Evaluation at the University of Washington School of Medicine projects that there could be nearly 395,000 US coronavirus deaths by February 1.

Voters are blaming Trump. A new Washington Post-ABC poll indicates that the failed coronavirus response is a major headwind for his campaign, with nearly two-thirds of respondents saying they don’t think Trump took appropriate precaution to reduce the chance he’d get the disease himself.

But instead of engaging with that reality, Trump on Saturday falsely insisted the coronavirus is “disappearing.”

Trump falsely claims the coronavirus is “disappearing,” then suggests the situation in the US isn’t that different from elsewhere, saying, “very big flareup in Canada.” Canada had about 2,500 new coronavirus cases on Friday, whereas the US had more than 58,000. pic.twitter.com/gzeHPZ2O6O

And on Sunday, Trump compared his response favorably with a projection from the early days of the pandemic based on a model in which the US government did nothing to slow the spread of the virus.

Trump wants you to believe that “the prediction” was 2.2 million Americans would die from coronavirus, so the fact we’re at 214,000 is a sign of how great he’s done. He’s referring to what the projected death toll would be if the government literally did nothing. pic.twitter.com/mWuOKaFy8F

While it’s debatable whether it’s good politics for Trump to hit the campaign trail to recklessly hold rallies fresh off a bout with the coronavirus that he likely contracted in the course of holding reckless events, it’s certainly not good public health practice.

Feeling scared about how your kids can enjoy Halloween this year? Have no fear – healthy snacks are here
5 hours ago
The radical implications of the Supreme Court’s new ruling on Wisconsin mail-in ballots
5 hours ago
Officials: Attack near base in eastern Afghanistan kills 3
5 hours ago
Hurricane Zeta menaces Mexico’s Yucatan, sets course for U.S. Gulf Coast – NHC
5 hours ago
Tejashwi Yadav poses 11 questions to PM Modi ahead of his Bihar visit
5 hours ago
Ant Group to close HK institutional book early amid ‘overwhelming’ demand for IPO-sources
5 hours ago