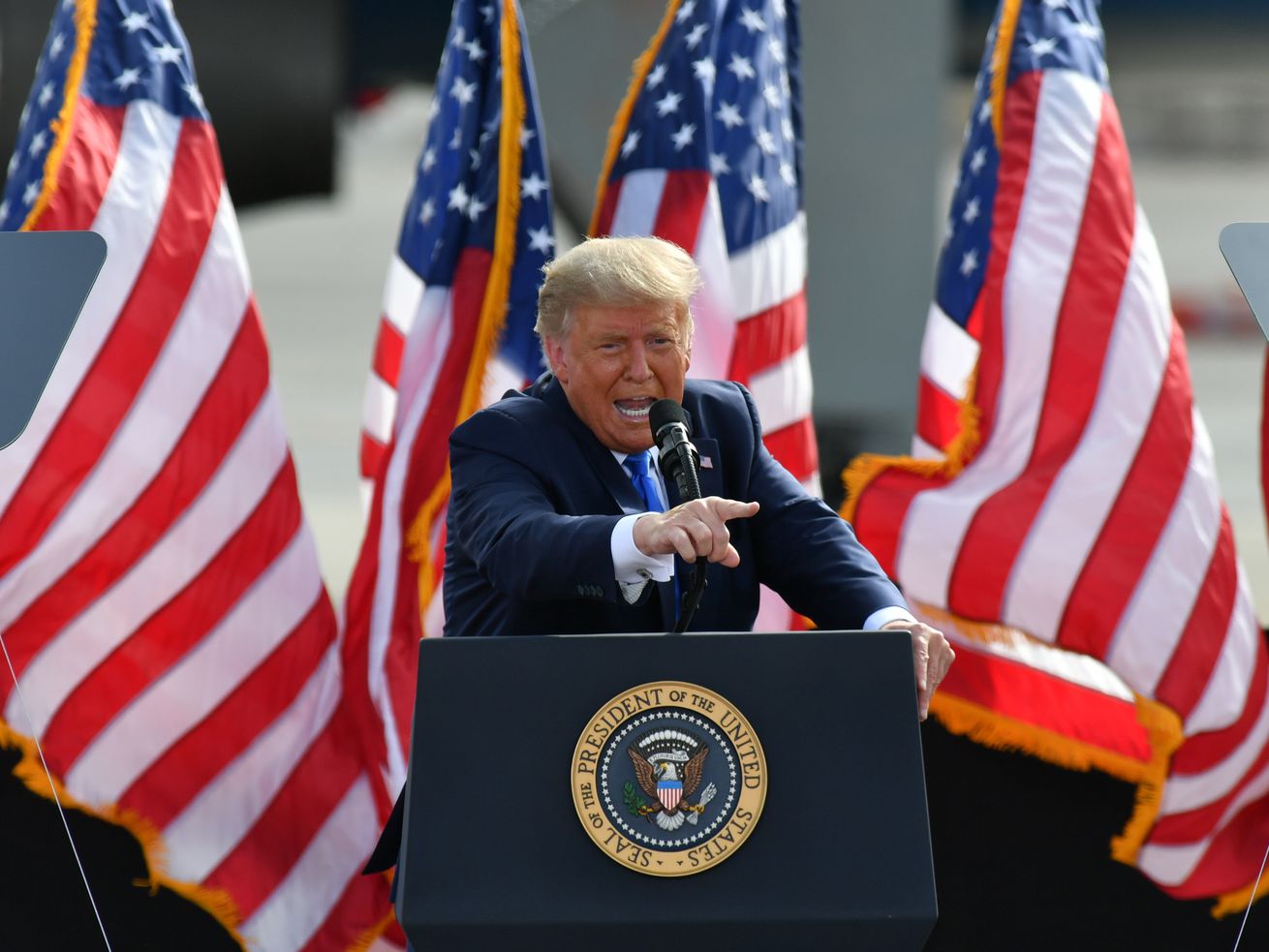 Savannah Guthrie criticized Trump for acting like a “crazy uncle” online. He wasted no time proving her point.

Two embarrassing episodes over the past 24 hours highlighted the depth of President Donald Trump’s credibility crisis as time runs short for him to turn around his flailing reelection campaign.

From refusing to denounce an absurd, obviously false online conspiracy theory during a high-profile town hall on NBC to retweeting a satirical website as if it’s breaking news, it’s becoming increasingly difficult to tell if Trump can separate fact from fiction.

While Trump campaigns on misleading messages about the coronavirus (which he insists is going away despite rising case numbers) and the economy (which he says is strong even as he’s poised to become the first president in modern history to oversee a net shrinkage in jobs), he’s behaving online like that far-right family member we’ve all had to mute on Facebook. And he doesn’t feel any shame about it.

At this late date, everyone, whether they’re on social media or not, understands that Trump isn’t above lying. But an exchange during his NBC town hall with Savannah Guthrie showcased for viewers who aren’t on Twitter just how off the rails his posting has become.

Trump is media illiterate: He can’t discern the difference between good information and bad

Guthrie grilled Trump about a retweet he posted on Wednesday evening of a conspiracy theory promoted by a QAnon account. The tweet accused Biden of pulling strings to take out the group of Navy SEALs who killed Osama bin Laden — a theory refuted by the fact that every Navy SEAL involved in the bin Laden raid is in fact still alive.

Instead of even trying to defend himself, Trump suggested to Guthrie that because he read it on the internet it might be true, describing the conspiracy theory as “an opinion of somebody and that was a retweet. I’ll put it out there. People can decide for themselves. I don’t take a position.”

It’s obviously reckless and irresponsible for the president to amplify incendiary conspiracy theories that are clearly false, not to mention defend QAnon, which he did during the same town hall. And in one of the more memorable moments of the evening, Guthrie hit back, admonishing Trump, “You’re the president. You’re not someone’s crazy uncle who can retweet whatever.”

The President provides a strange defense of his retweeting of a Seal Team Six conspiracy theory pic.twitter.com/3TrCRwF5Au

But if you thought Guthrie drawing blood on national TV would be enough to chasten Trump, he quickly demonstrated otherwise.

On Friday morning, Trump embarrassed himself for the second time within a day by retweeting an article from the satirical Babylon Bee website (the site’s motto is “Fake news you can trust”) as part of a failed attack on Twitter and Hunter Biden.

Twitter Shuts Down Entire Network To Slow Spread Of Negative Biden News https://t.co/JPmjOrKPcr via @TheBabylonBee Wow, this has never been done in history. This includes his really bad interview last night. Why is Twitter doing this. Bringing more attention to Sleepy Joe & Big T

Suffice it to say, Twitter did not shut down in order to suppress bad Hunter Biden news. But instead of admitting his error or even deleting the tweet, Trump followed up with another, clarifying that by “Big T” he wasn’t referring to himself, but rather “Big Tech.”

Big T was not a reference to me, but rather to Big Tech, which should have been properly pointed out in Twitter’s Fake Trending Section!

The CEO of the Babylon Bee, Seth Dillon, responded to Trump by tweeting, sarcastically, that his satire site is “the president’s most trusted news source.”

It’s unclear whether Trump has anybody in his orbit at this point who’s willing to point out to him that he’s tweeting out satire as though it’s breaking news. It’s also possible he simply has no shame about amplifying egregious fake news if he thinks getting people to believe lies is in his self-interest.

Whatever the case, it’s clear that this president’s truth barometer is broken beyond repair. He has access to the best intelligence in the world, yet all too often he’s liable to believe anything he reads on the internet so long as it’s useful for his political ends. And his fake news problem only seems to be getting worse.

Britain strikes back! UK launched SECRET cyber-attacks on Russia says ex-security chief
2 hours ago
Nicola Sturgeon blasted for ‘betraying’ hospitality sector with shock new restrictions
2 hours ago
‘Rip it up!’ Withdrawal Agreement means UK to have WORSE EU trade terms than Australia
2 hours ago
Meghan Markle told ‘her life would change with Prince William as King’
2 hours ago
‘He takes no s**t!’ Royal fans praise Philip for ‘walking away’ from Meghan and Harry
2 hours ago
Prince George, Charlotte and Louis heartbreak over cancelled Christmas with Queen
2 hours ago

Britain strikes back! UK launched SECRET cyber-attacks on Russia says ex-security chief
2 hours ago
Nicola Sturgeon blasted for ‘betraying’ hospitality sector with shock new restrictions
2 hours ago
‘Rip it up!’ Withdrawal Agreement means UK to have WORSE EU trade terms than Australia
2 hours ago
Meghan Markle told ‘her life would change with Prince William as King’
2 hours ago
‘He takes no s**t!’ Royal fans praise Philip for ‘walking away’ from Meghan and Harry
2 hours ago
Prince George, Charlotte and Louis heartbreak over cancelled Christmas with Queen
2 hours ago
EU’s banks to ‘run out of cash in days’ if Brussels mounts ‘childish’ Brexit punishment
2 hours ago
Barnier under pressure to strike Brexit deal as EU27 finally realise UK market IS valuable
2 hours ago
Piers Morgan reveals Donald Trump called him to share secret to US election win
2 hours ago
Kate Middleton heartbreak: How Kate has tough decision to make for children this Christmas
2 hours ago
Poland had some of the strictest abortion laws in Europe. They just got even stricter.
2 hours ago
The police shooting of Marcellis Stinnette and Tafara Williams, an unarmed Black couple, explained
2 hours ago