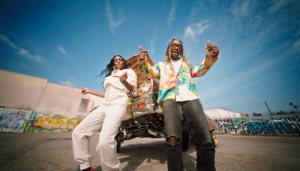 Ty Dolla $ign shares a new music video for “By Yourself” ft. Jhené Aiko, Bryson Tiller & Mustard. Directed by Alex Bittan and Ty Dolla $ign himself, the visual stars Tiffany Haddish as an undervalued partner in a one-sided relationship where her significant other only cares about himself. Upon coming to terms with the situation, her character first breaks free mentally, symbolized by her boyfriend’s blurred-out face. Then finally, she leaves him altogether as she dances in celebration in front of lowriders in true West Coast fashion. “By Yourself” has over 150M+ streams to date from Ty Dolla $ign’s critically acclaimed, third studio album, Featuring Ty Dolla $ign out now via Atlantic Records.