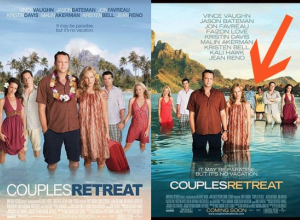 Film star and comedian Faizon Love filed suit today against Universal Studios over the company’s decade-long, racist advertising campaign for the 2009 film Couples Retreat in which Love starred. The suit accuses Universal of breach of contract as well as fraud and violations of California’s Unruh Civil Rights Act for intentional discrimination because Love is Black.

Love was one of eight principal stars and one of only two Black stars, along with Kali Hawk, in the comedy film, which has grossed over $171 million to date. Love’s contract with Universal guaranteed him star billing on par with six of his co-stars, including in advertising and promotional materials for the film. In the U.S., Love and Hawk appeared in those materials.

Yet, when the picture was released internationally, the studio used a different poster from which Love and Hawk’s faces and names were removed. The studio also refused to invite Love to participate in the European press tour for the film’s initial foreign release

Love challenged Universal in 2009 over the racist change to its marketing for Couples Retreat, and the studio promised to cease using the offending ad. It also promised to correct its bad behavior by providing Love with other significant film roles, as well as a prominent role in a television show alongside Vince Vaughn, with whom Love appeared in the film. Love accepted these promises at face value and, at the time, declined to pursue legal remedies.

Despite Universal’s failure during the past dozen years to make good on promises for additional film and TV roles, Love believed the company had at least made good on its pledge to correct its advertising to meet its contractual obligations to him.

However, in July 2020, Love discovered Universal continues to use the blatantly racist posters in direct violation of his contract. Given that these actions have gone uncorrected for 12 years, Love felt he was left with no choice but to sue.

“As far as Universal was concerned, its contract meant nothing, its promises to correct its egregious behavior meant nothing, and its pledges to Faizon Love meant nothing,” said Love’s lead attorney Eric George of BGR. “Yet this is not merely a breach of contract and good faith: It is nothing less than a deliberate act of racism on the part of Universal Studios at the highest levels.”

Back in 2009 Universal Studios was within the corporate structure of the General Electric Co., and the decision-makers who removed Love from the advertising were under the supervision of Adam Fogelson, now chairman of STX Films, the suit alleges.

The lawsuit goes on to allege that Fogelson and the film’s producer, Scott Stuber, now head of original programming for Netflix, personally promised Love the racist poster would be taken out of publication, and they would provide new opportunities to him.

The suit states, “Fogelson . . . called Mr. Love in November 2009 and apologized for the racist poster. Mr. Fogelson could not, and did not attempt to justify the the racist poster, and told Mr. Love that defendants would fix the problem by not using the offending image going forward. Scott Stuber, who at the time headed Stuber Pictures, a producer of Couples Retreat, and who was under a five-year production deal with Universal Studios, called Mr. Love to apologize for the use of the racist poster, likewise promising that it would be destroyed and never used again to promote the movie.”

The lawsuit alleges that these promises were false, and the wrong perpetrated against Love in 2009 continues to this day now under Universal’s current ownership, Comcast. Comcast owns Universal through the NBCUniversal Film and Entertainment division of its wholly owned subsidiary NBCUniversal, which both then and now has a stark lack of diversity, according to the lawsuit.

Continuing to see the “Love-less” promotional materials on websites around the world – including Europe, Latin America and Asia – as well as on major websites like MSN.com and Sonychannel.com, has resulted in both lost professional opportunities for Love and an immensely painful reminder of the walls Universal and other studios erect to stymie Black success.

Love has been a successful performer as a stand-up comedian, film and television actor, and voice-over artist for more than 30 years. He has more than 75 acting credits, including lead roles in the hit holiday film Elf and the cult classic Friday. Because of his experience and success, he was chosen for a lead role in Couples Retreat. He agreed to a lesser salary for the film because he believed the role would provide him an opportunity for additional high-profile film and TV roles in the future, the suit states.

“This film was a big money-maker for Universal, but instead of honoring my work and my contract, the studio chose to render me invisible to billions of moviegoers around the world,” Love said. “They have not only hurt me financially, they have hurt me in a deeper way by dismissing me because of my Blackness – and they have hurt all Black performers by continuing to perpetuate racism in the movie industry.”

Love said he filed the lawsuit “not just for the wrong committed against me, but for the discriminatory practices against Blacks and people of color in the entertainment industry. I want to ensure that future generations don’t have to endure the racism and whitewashing that I have experienced.”

The lawsuit is especially significant in 2020, in the wake of the racial justice movement and the Motion Picture Academy’s pledge to address the historic lack of diversity in Academy Award nominations spotlighted by the #OscarsSoWhite movement.

The post Universal Studios Sued For Racism By Faizon Love appeared first on The Source.

How law enforcement is using technology to track down people who attacked the US Capitol building
3 hours ago
They don’t come as pills, but try these 6 underprescribed lifestyle medicines for a better, longer life
3 hours ago
Stickiness is a weapon some plants use to fend off hungry insects
3 hours ago
READ: Transcript of Amanda Gorman’s inaugural poem
3 hours ago
Schedule of Biden-Harris Inauguration Day: Timeline of events and how to watch
3 hours ago
Biden replaces Andrew Jackson portrait in Oval Office, adds Cesar Chavez bust
3 hours ago

How law enforcement is using technology to track down people who attacked the US Capitol building
3 hours ago
They don’t come as pills, but try these 6 underprescribed lifestyle medicines for a better, longer life
3 hours ago
Stickiness is a weapon some plants use to fend off hungry insects
3 hours ago
READ: Transcript of Amanda Gorman’s inaugural poem
3 hours ago
Schedule of Biden-Harris Inauguration Day: Timeline of events and how to watch
3 hours ago
Biden replaces Andrew Jackson portrait in Oval Office, adds Cesar Chavez bust
3 hours ago
Kayleigh McEnany leaves letters for incoming Biden press officials
3 hours ago
McConnell faces conservative backlash over Trump criticism
3 hours ago
QAnon followers struggle to explain Biden inauguration
3 hours ago
Chris Wallace: This was best inaugural address I’ve ever heard
3 hours ago
Trump extended Secret Service protection for family members in final days in office: report
3 hours ago
Romney: Founders didn’t intend pardons to be used for ‘cronies’
3 hours ago