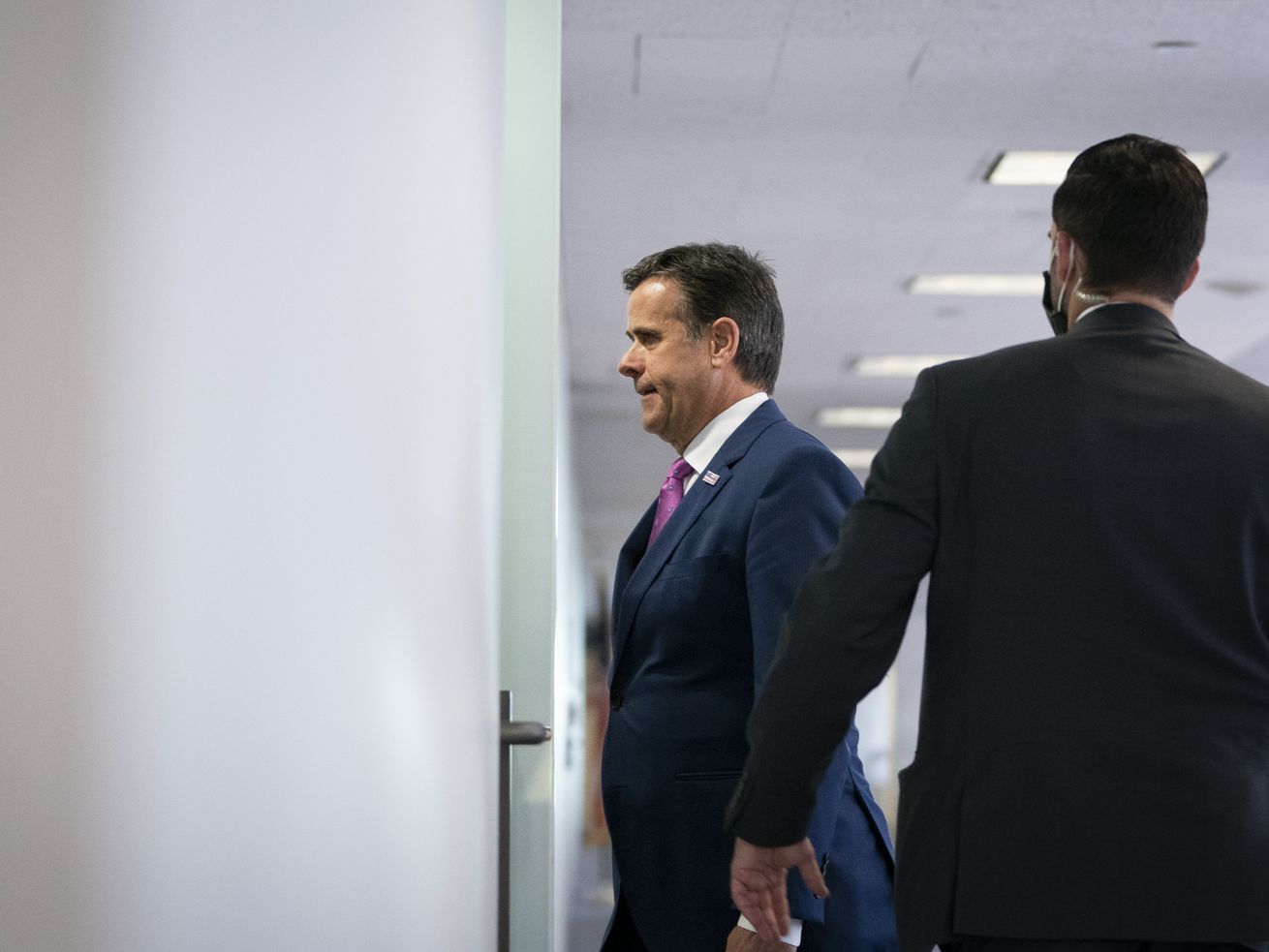 Director of National Intelligence John Ratcliffe arrives to a closed-door briefing on election security at the Senate Intelligence Committee in the Hart Senate Office Building on Capitol Hill on September 23, 2020 in Washington, DC. | Photo by Drew Angerer/Getty Images

Iran is behind intimidating emails sent to some Democratic voters, officials say.

Iran and Russia are using voter registration data to interfere in the US election, top national security officials announced during a surprise press conference Wednesday night.

Iran is behind the spoof emails to some voters, and is spreading disinformation online about sending fraudulent ballots from overseas, Director of National Intelligence John Ratcliffe said Wednesday. Russia, too, has gotten access to voter registration data, just as it did in 2016, he said.

Both Ratcliffe and FBI Director Christopher Wray said no votes have been compromised. “Today, that [election] infrastructure remains resilient,” Wray said Wednesday. “You should be confident that your vote counts.”

National security officials didn’t really offer many other details in their abrupt announcement. The spoof emails appear to be those sent to some voters in Alaska and Florida, which claimed to be sent from the Proud Boys, a far-right organization. The emails reportedly targeted Democratic voters, claiming they had access to voting infrastructure and threatening them if they did not vote for Trump.

The Washington Post reported before the press conference that the US government had concluded Iran was behind the emails.

Threatening emails like this — purporting to be from the Proud Boys — are being sent to voters in Florida and Alaska.

We do not know who is behind them, but whoever it is is taking a lot of steps to mask their identity. https://t.co/cB3RpocA5i pic.twitter.com/NjYti0ufbe

Officials did not elaborate on how they concluded Iran was behind the spoof emails and other disinformation, nor did they give many details about Russia’s potential activities. Ratcliffe said that the disinformation promoted by Iran was intended to “incite social unrest” and damage President Donald Trump, though, again he did not offer more details about that conclusion. Neither Ratcliffe nor Wray took questions.

A person familiar with the intelligence told Vox that, with the email campaign, Iran intended to hurt Trump, but that is not necessarily true of all of their malign activities. But the idea here was “to create a backlash against Trump because he’s in bed with an abhorrent group.”

All in all, it was a pretty odd press conference. The Office of the Director of National Intelligence has already warned the public against foreign interference in the 2020 election, much of which is designed to sow discord and undermine faith in the democratic process. So this kind of divisive, disinformation campaign was expected.

And as many have pointed out, voter registration rolls are publicly available, and so it’s not clear what exactly it means when officials say foreign actors obtained voter registration data. In 2016, Russia did target voting systems in all 50 states, though no voter information or votes were changed.

“Voter data, including partisan affiliation, is PUBLIC,” David Becker, the executive director of the Center for Election Innovation & Research, tweeted. “Easy to get and in some cases free. The fact that this data is out there is NOT indication of any data breach.”

The press conference is notable for what officials didn’t say

In August, the ODNI named Russia, China, and Iran as the primary election interference threats. But each have different goals when it comes to foreign interference. As experts told me earlier this year, Russia is very much focused on creating chaos, while Iran and China are less eager to see the US in disarray, and more eager to push their national objectives.

Still, Iran in the past has used social media to spread propaganda and divisive content, and based on the announcement tonight, they’re seeing an opening to go further in 2020.

“In recent years, Iranian information operations have continued to push boundaries using bold and innovative approaches. However, this incident marks a fundamental shift in our understanding of Iran’s willingness to interfere in the democratic process,” said John Hultquist, senior director of analysis for Mandiant Threat Intelligence, said in an emailed statement.

This kind of disinformation campaign doesn’t take a whole lot of sophistication, though Iran’s capabilities, especially when it comes to cyber operations, are not quite at the level of Russia and China.

And while officials did not go into details about what Russia was up to, the Kremlin is very much interfering in the 2020 election, spreading online disinformation and by trying to plant denigrating information about Democratic candidate Joe Biden. And more questions have come up after the New York Post published emails purportedly from Hunter Biden, which were given to the paper by Trump lawyer Rudy Giuliani. Those emails were an attempt to drum up a scandal about Biden’s dealings in Ukraine, which has continued to percolate in right-wing circles. Giuliani had also previously worked with Andrii Derkach, a Ukrainian politician that the US government sanctioned for interfering in the 2020 election.

DNI Ratcliffe previously said that “there is no intelligence that supports” that the Hunter Biden emails were “part of a Russian disinformation campaign.” The FBI has told Congress it has “nothing to add” to Ratcliffe’s statement.

But the authenticity and actual source of the emails (the story given to the New York Post about where the laptop came from, is well, something) is still unclear, and dozens of former intelligence officials have said the emails have all the “earmarks” of classic Russian disinformation.

Again, officials did not give any details Wednesday as to Russia’s activities, and didn’t address anything related to the Hunter Biden emails. But given the lingering questions around the story, the timing of a press conference to call out Iran and Russia is notable. Also, when it comes to Iran, the Trump administration is also engaged in a maximum pressure campaign against the regime, and has consistently called attention to Iran’s misdeeds as justification for sanctions and other tough measures.

Still, all threats to intervene or meddle in the US elections are serious. Iran, or Russia, or anyone else are exploiting the divisions and partisan tensions already in US society, and with just two weeks before Election Day, much of it will be geared toward depressing turnout. As FBI Director Wray said Wednesday, and the best place for accurate, up-to-date voter information is your state election officials. Because voters should know that it’s only going to get worse from here until Election Day.