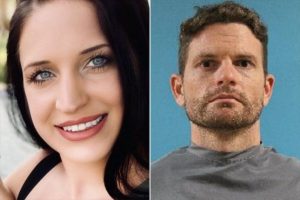 A Texas man is being accused of killing the mother of his 1-year-old daughter and allegedly disguised himself as a black man wearing a fake beard and blackface.

Andrew Charles Beard, 33, surrendered himself to Carrollton police after learning a warrant had been issued for his arrest. Beard is charged with murder in connection with the death of Alyssa Burkett, his baby girl’s mother.

Authorities have alleged that in an attempt to avoid detection, Beard actually donned a fake beard and applied dark makeup to his entire face.

Citing a copy of the arrest affidavit, police allege Beard– a white man, tried to shield his identity from security cameras and witnesses. At least two witnesses did, in fact, report that it was a Black suspect who shot Burkett in the head before stabbing her repeatedly.

The affidavit alleges dark liquid foundation and a fake beard with cosmetic glue were found in a car believed to belong to Beard.

24-year old Burkett was attacked Oct. 2 on her way to work outside the Greentree Apartments. Police arrived to find her outside, on the complex’s front steps, with several of her co-workers attempting to render first aid. Authorities learned the two had been involved in a bitter custody battle over their daughter and Burkett was awarded custody of the child on Sept. 30.

Beard is charged with murder in connection with the death of Alyssa Burkett, his daughter’s mother.

The post [WATCH] Cops Alleged Man Killed His Child’s Mother Disguised As A Black Man appeared first on The Source.