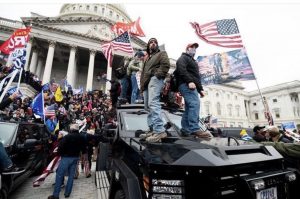 Tuesday afternoon the FBI and Justice Department held a conference with an update on the attack on the U.S. Capitol on Jan. 6 by President Trump supporters. Steven D’Antuono from the FBI’s Washington Field Office and the Department of Justices’ acting U.S. Attorney Michael Sherwin were both there.

According to D’Antuono, the FBI has worked with the United States Attorney’s office, law enforcement in D.C. and across the nation to arrest and charge individuals involved in the destruction. Since the U.S. Capitol attack, the FBI has opened over 160 case files. D’Antuono credits some of these developments to “the American people.”

Last Tuesday the FBI asked for the public’s assistance in identifying U.S. Capitol Attackers on Jan. 6.

According to D’Antuono, the FBI received more than 100,000 digital media of the attack from the public. Watch the full conference here.

The post WATCH: FBI and Justice Department Officials Give Updates on Capitol Attack appeared first on The Source.