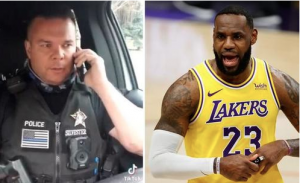 Lebron James became the target of the law enforcement community’s criticism following his “You’re Next” tweet to Columbus, Ohio Police Officer Nicholas Reardon, the cop who shot 16-year-old Ma’Khia Bryant on April 20. Now, a police officer from Idaho made a a very abrasive video about James’ tweet that has gone viral and even earned him some cash along the way.

Bellevue, Idaho Officer Nate Silvester made a video(seen below) mocking James’ now-deleted tweet, but was suspended from the force because of the video’s content on such a controversial topic about police accountability. After his suspension, a GoFundMe was created for Silvester, which has earned him over $200,000 in donations. Silvester has even created a video in response to his support, saying that he has been “bullied and vilified.”

The post [WATCH] Idaho Cop Mocks LeBron James’ Ma’Khia Bryant Tweet On TikTok And Gets $200K In Donations appeared first on The Source.