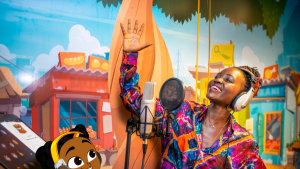 Just in time for World Book Day today, Africa’s first kid superhero is on a mission to save all the books that have been taken by the evil Tobor! YouTube Originals delivers a two-part special with Oscar-winning actress Lupita Nyong’o as the voice of Mama Dunia in the  new animated series featuring a young superhero African girl named Sema. The newest adventures of this free-to-stream series are available today, Friday, April 23 at 8:00AM PT / 11AM ET,  on Super Sema’s official YouTube channel.

Fueled by STEAM (Science, Technology, Engineering, Art, and Math) super powers, the series follows the world-changing journey of an extraordinary young African girl, Sema, who lives in the neo African-futuristic community of Dunia.

In the first episode of the two-part special, “Not So Super Sema, ” all of the books in Dunia go missing and Tobor promises to destroy them by midnight. Sema rallies Dunia to stand up against Tobor, but he laughs in her face and she must figure out how to save Dunia’s future.

In the second episode of the special, Sema feels defeated after trying everything to win back all the books from the evil clutches of Tobor without success, and she is ready to pack away her super costume and give up being Super Sema. A desperate visit to The Great Tree conjures up the spirit of her mother Mama Dunia (voiced by Lupita Nyong’o), who rekindles her sense of self-belief. Sema realizes giving up is not an option. Super Sema is back, and this time she means it!

The post [WATCH] Lupita Nyong’O Voicing Her Role as Mama Dunia in YouTube Original Series appeared first on The Source.