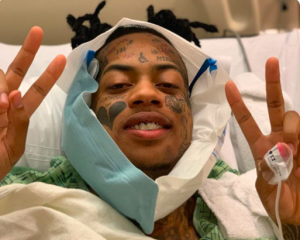 Rapper John ‘Boonk Gang’ Gabbana has had many ups and downs in the industry.  The Instagram star turned rapper has a huge following with an IG account that earned him more than 4 million followers. He released the single “Mutton” in July of 2017.

More known by some for his antics than his rap music, the rapper has turned his life around after being saved. His first video on Instagram featured him stealing a box of chicken from a Popeye’s restaurant, and for some reason, it launched a questionable career of similar antics.
The clip received over one million views and in no time at all, he had earned over 600,000 followers. Although, there were some issues a year later which resulted in his account being shut down.

Most people tune into his content to watch him mess with people and break the rules, but he’s also a rapper. Under the name Boonk Gang, Hill has released two albums; Gabbana Attack and Dat Boonk Gang Shit.
Now the young rapper once known for doing evil pranks is now giving his life to the Lord.Have a blessed journey and we salute him for being vulnerable with the world.

The post [WATCH] Rapper John ‘Boonk Gang’ Gabbana Turns His Life Around & Gets Baptized appeared first on The Source.