TYSON FURY enjoyed a workout with one of his kids on Sunday – before his children decided to team up on the WBC champion.

The Gypsy King is currently preparing for his bumper heavyweight unification showdown with Anthony Joshua.

Tyson Fury spent Sunday teaching his kids how to box[/caption]

The youngsters quickly teamed up against their heavyweight dad[/caption]

The British pair have both penned a contract for a £200m two-fight deal with promoters now desperately trying to determine a venue.

But the 32-year-old enjoyed a break from the rigours of training to pass on some of his knowledge to the next generation of Fury’s yesterday.

His wife Paris, who is pregnant with the couple’s sixth child, shared a cute clip of her husband teaching one of his boys how to box.

She captioned the video with: “Practice time on a rainy Sunday.”

But moments later he was under attack as his three boys teamed up on him, with Paris once again sharing footage alongside a caption saying: “They don’t fight fair.”

Meanwhile, Fury’s dad has cast doubt over the fight with AJ by insisting an agreement means nothing without a date and venue.

And John Fury reckons people should not be getting ahead of themselves just yet.

Appearing on BT Sport, the former boxer said: “We need to get him out, whether these cowboys get the job sorted which I don’t think they’re going to do.

CASINO SIGN UP OFFER: CLAIM UP TO £800 IN CASINO BONUS CASH

Most read in Sport

DAY AT THE BREACH

NICE FLO TO IT

“What have they signed? They’ve signed nothing in my eyes. They’ve got no date, no venue, no nothing.

“It’s all about someone coming forward and saying, ‘Right, I’ll pay for the fight, I’ll stage the fight.’ Where are these people?

“That’s the position it’s in and I don’t think they can get it together. It’s too big for what’s happening and the climate the world is in at the moment.

“I just don’t think the timing is right for a fight of that magnitude with the state of the world.”

Fury, 32, has fought just once in the last 18 months – that stunning win over Deontay Wilder in February 2020.

All eyes are on the showdown with Joshua.

The Middle East was expected to host the blockbuster bout in June or July but Eddie Hearn admitted a full Wembley is an alternative if lockdown restrictions are lifted in time.

However, Fury Snr, 56, added his son will get into the ring twice in 2021 regardless of what happens with the 31-year-old WBA, IBF and WBO king.

He continued: “Tyson needs to fight twice this year, with or without AJ.

“Tyson is not bothered by any heavyweight on the planet – he’s passed being bothered by this man or that man.

“It’s a business for Tyson and we need to move on, get a living properly, sharpen his tools and keep him sharp in case that big night comes knocking.

“But I think they’re dragging their heels a bit because they don’t want to and I don’t blame them.” 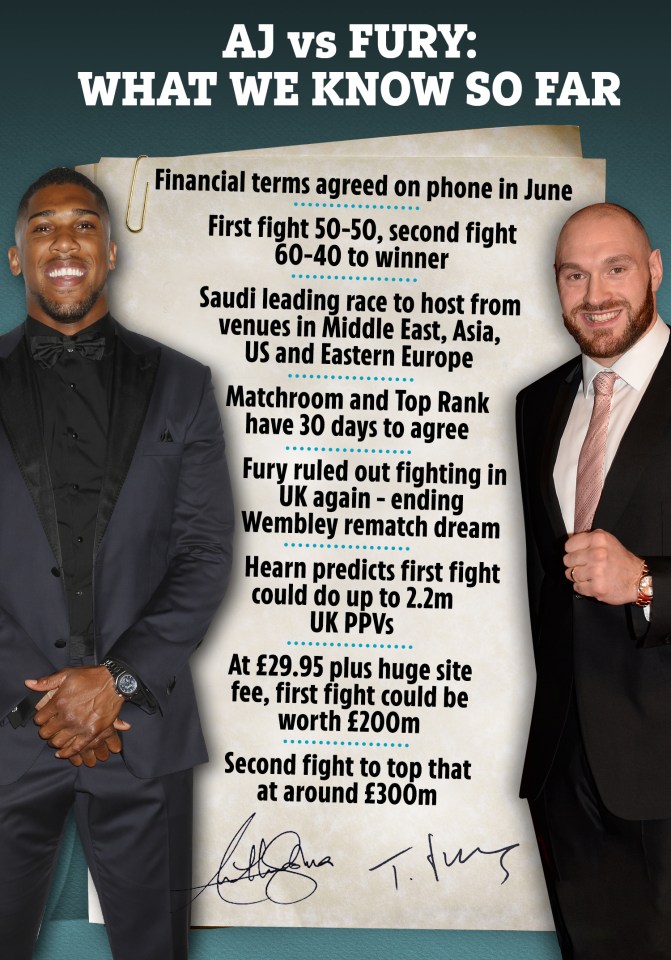