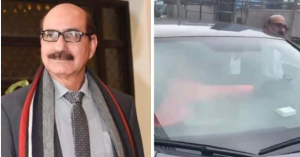 A video that has now gone viral shows two teenage girls using a taser to carjack 66 year old Uber Eats driver Mohammed Anwar, who died in a car crash shortly after the teenagers attempted to steal his car.

The girls first tased Anwar, who can be heard yelling, “This is my car!”, before the car is started and takes off down the street. Anwar can be seen hanging out of the driver’s side window when the car takes off, but the driver of the stolen vehicle crashed not long after the robbery, killig Anwar in the crash.

According to TMZ, the two girls have been arrested and are facing felony murder charges.

The post [WATCH] Uber Eats Driver Killed In Carjacking By Two Teen Girls In D.C. appeared first on The Source.