THIS is a war now and those of us who have known nothing but peace – everyone under the age of 76 – have struggled to get our heads around that reality.

When it comes to combating, it feels like we still have our L-plates on. Too much complacency, too many cock-ups, too little comprehension that this virus wants to kill everything we love.

Brigadier Phil Prosser, Commander of the 101 Logistic Brigade, during a media briefing in Downing Street, London, on coronavirus [/caption]

How else to explain that only from next week, with almost 80,000 dead, are we going to require anyone flying into the UK to produce a negative coronavirus test?

How else to explain that there were initially concerns Public Health England — the miserable quango tasked with protecting the health of the nation, who lectured us for years about the mortal threat from sugary breakfast cereals — might not be able to deliver vaccinations on Sundays. They have now assured us they will.

We bitch about our leaders but, in truth, what can we expect? They are peacetime politicians who are dealing with the kind of national emergency that is unknown outside of war. And so it was a massive relief to see that on the day the UK recorded 1,162 deaths — the second-highest daily toll since the start of the pandemic — the Prime Minister is recruiting the British Army.

Thursday’s Downing Street press conference was a bit different. At the lectern to Boris’s left, where there usually slouches a boffin with the gloomy air of a Victorian undertaker, there stood Brigadier Phil Prosser of the 3rd Division, ramrod straight in his Army fatigues.

“My team are used to complexity,” said Brigadier Prosser, inset below, and seeing his cool, calm, can-do attitude in Downing Street was the best news since the vaccine.

Winning this war will take every one of us.

It will take politicians knowing that nothing is now more important than rolling out the vaccine to 2million a week.

It will take civil servants having the wit to see that we need a bonfire of red tape so that retired doctors and nurses can start giving the nation a shot in the arm.

And it will take every one of us doing what we can to avoid getting sick and being a burden on an NHS that is perilously close to being overwhelmed.

Boris Johnson wants 200,000 vaccinations every day by the end of next week[/caption]

The will is there, as we see with The Sun’s Jabs Army campaign, and the way a multitude of major firms are trying to do whatever they can.

Paddy Power has 345 closed betting shops. They have offered every one of them as a temporary vaccination centre.

Boris wants 200,000 vaccinations every day by the end of next week. It is a logistical nightmare. Much can — and will — go wrong.

But our Armed Forces have a genius for dealing with logistical nightmares.

I was reminded of the London 2012 Olympic Games, which we recall in our collective memory as a spectacular triumph. And it was. But when there were problems with private security firm G4S providing adequate training, schedules and uniforms to their staff, London 2012 felt like it could all go very wrong.

Then the British Army were called in and those 13,500 military personnel were absolutely brilliant — calm, friendly, polite, efficient and spectacularly professional. Our Armed Forces ensured that London 2012 went like a sweet dream. They will do the same job for the greatest vaccination roll-out in British history.

As a nation we are in hand-to-hand combat with coronavirus. And there is no one else I’d have in the trenches next to me than our peerless troops. 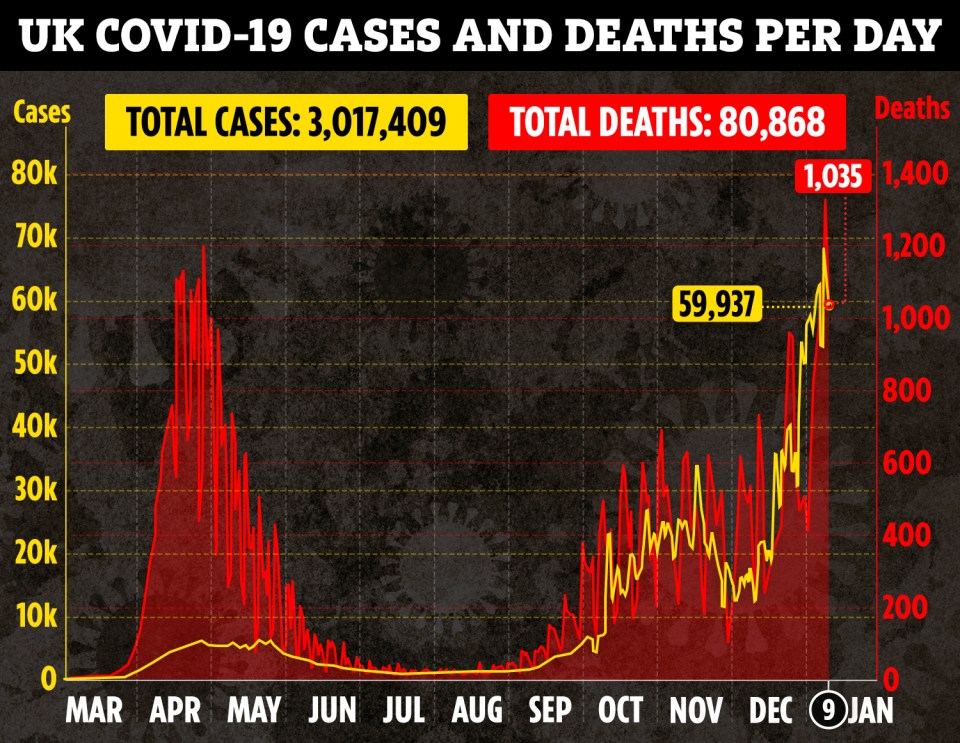 Bowed to mob for too long

VLADIMIR Putin and Xi Jinping must be laughing their socks off at the chaos at the heart of US democracy.

The old dictators are laughing too soon.

The violence in Washington, which has seen five die including a policeman, did not work. Because you can’t shout down democracy.

If Donald Trump had evidence that the American presidential election was rigged, then he has surely had ample opportunity to present it.

He has not done so. He should have accepted his defeat with good grace.

Trump could have left the White House after one term with his orange head held high.

The spoilt, petulant big baby in him chose to throw his toys out of the pram. Encouraging his dumbest supporters to take direct action against an election was obscene. And now, banned for life by Twitter, he’s lost his main connection with the outside world.

But the ugly scenes in Washington show how resilient democracy still is, even in a bitterly divided nation.

Joe Biden will soon be in the Oval Office.

And democracy will survive being run by a man who cared more about himself than he did his country.

Democracy – for all its flaws – is still the best way to guarantee our freedoms.

“Democracy is the worst form of government,” said Winston Churchill. “Except for all the others.”

If there is a lesson to be learned from the anarchy in the US, it is that we have deferred to the mob for too long.

Trump’s ragtag bunch of supporters – which included a conspiracy theory-addled shaman – tried to impose their will after losing an election with violence.

And while Remain supporters have never reacted with displays of violence, they do share some snobbish characteristics.

Trump’s supporters never accepted the result of the 2020 presidential election.

And too many Remain supporters “would not accept” the Referendum result. Both blindly believe they are protecting the heart of their nation but are actually damaging it.

OLIVIA Wilde, new girlfriend of Harry Styles could not have been more open about her sex life in the past.

“We have sex like Kenyan marathon runners,” confessed Olivia about another partner.

Walsh is best of the Beeb

WE saw the BBC at its very best this week.

The report by Fergus Walsh from inside an Intensive care Unit in London’s University College Hospital was the most powerful report I have seen on coronavirus.

In clear, calm, incisive tones, Walsh took us inside the grim reality of a London Intensive Care Unit.

And it was horrific.

Overwhelmed doctors and nurses. Desperately ill patients – some of them in their twenties and thirties. A pregnant woman fighting for two lives.

It was powerful, moving stuff and it should be required viewing for the morons who do not think the rules apply to them, and the idiots who think the whole health emergency is overblown. In fact, I would recommend that Fergus Walsh report to everyone in the land.

We hear a lot about the decline of the BBC. A recent poll suggested half of all Brits no longer think the BBC represents their values. That is – of course – a direct result of the corporation throwing impartiality out of the window of Broadcasting House.

Not easy, because, since 2016, so much faith has been betrayed. But the report by Fergus Walsh was unforgettable and a reminder of the BBC we loved and lost.

For those devastating minutes when he was reporting from a hospital at breaking point, Fergus Walsh spoke to – and for – the entire nation.

Laugh all the way to the bank

IN 1973 Neil Young chuckled to an audience that a corporation had asked to buy his song Heart Of Gold.

“It would have to be called Burger Of Gold,” laughed Neil, who has sold his back catalogue to investment firm Hipgnosis Songs Fund for £110million. Neil is probably still laughing about the commercialisation of rock music. But now it’s all the way to the bank.

IF your son or daughter is in Year 11 or Year 13, then my heart goes out to you.

Every schoolkid in the land has lost a huge part of their education.

But those who have had their GCSEs or A-levels cancelled this year must feel like they are losing their future.

Whatever scheme they devise, some children will be told they have failed an exam they had never been allowed to sit. I can think of nothing crueller.

The schools closed too quickly in the first lockdown.

In what is hopefully the last lockdown, schools must be the first things to open.

Joe Biden is officially president. Here’s what he wants to do in office.
50 mins ago
Cop who warded off insurrectionists at the US Capitol escorts Kamala Harris on Inauguration Day
50 mins ago
The Kamala Harris identity debate shows how America still struggles to talk about multiracial people
51 mins ago
Kamala Harris is poised to be a historic — and influential — vice president
51 mins ago
The Hungry Mungry Trump
51 mins ago
The moment Trump officially left Washington
51 mins ago
Obalon Therapeutics stock soars to lead all gainers on massive volume after merger with ReShape
51 mins ago
Maha: 68 pc of targeted recipients get COVID-19 vaccines
51 mins ago
Motor racing-Domenicali says F1 could reduce and rotate races in future
51 mins ago
Evictions to racial equity: Calls for ‘immediate’ Biden action on housing
51 mins ago
Kochi court directs investigating officer to bring approver in actress attack case to court tomorrow
51 mins ago
UP HC to examine if lawyer in black robes exempted from coercive police action
51 mins ago