DONALD Trump has only a few days left in office, but top senators have been calling for his presidential powers to be removed before then.

After his supporters ripped down fences and breached the US Capitol building on January 6, many are wondering if the 25th Amendment will be used.

What is the 25th amendment?

The 25th amendment states: “In case of the removal of the President from office or of his death or resignation, the Vice President shall become President.”

In simple terms, it means that if the President is unable to do his job, the Vice President will take on his role.

It states: “The president, vice president and all civil officers of the United States, shall be removed from office on impeachment for, and conviction of, treason, bribery, or other high crimes and misdemeanors.”

If the 25th amendment was invoked, Mr Trump would be removed from office and Vice President Mike Pence would take office.

When has the 25th amendment been used?

The 25th Amendment has been used a total of six times for various reasons.

It was first used in 1973 when President Richard Nixon nominated Congressman Gerald R. Ford of Michigan to fill in as Vice President after Spiro Agnew’s resignation.

Less than a year later, it was used again when Vice President Ford became President after Richard Nixon resigned.

Ford also used the Amendment to allow Nelson Rockefeller to fill the Vice Presidential vacancy when he took over from Nixon.

The remaining three times were used during health scares – to allow the Vice President to fill in for short periods.

In 1985, President Ronald Reagan had surgery to remove a potentially cancerous growth in his colon and he unofficially used the Amendment to allow Vice President George H.W. Bush to temporarily step in.

Could it lead to Donald Trump’s impeachment?

Another way Trump could be removed from office is via impeachment.

Democratic congresswoman Ilhan Omar of Minnesota said she was drawing up articles of impeachment against the President following Trump’s call to his supporters to fight to undo his election loss.

But with only a few days left of the Trump presidency, this seems unlikely.

The Senate acquitted President Trump in February 2020 after an impeachment trial led by the Democratic-controlled House on charges of trying to pressure Ukraine to investigate Joe Biden and his son Hunter Biden.

What happened on Capitol Hill?

Hundreds of Trump fans sieged the Capitol building on January 6, 2021.

Over 50 people have been injured and 5 have now died during the clashes.

A woman was shot in the chest and later died, while tear gas was fired by police.

One policeman, officer Brian D. Sicknick, was fatally injured too.

The chaos came as members of Congress were meeting to vote and certify the 2020 presidential election results.

Supporters of President Donald Trump climb the west wall of the U.S. Capitol on Wednesday, January 6, 2021, in Washington[/caption]

Senators reportedly began to evacuate the Capitol building as cops said tear gas was deployed in the rotunda.

What have people said about impeachment on social media?

He tweeted: “The fabric of our democracy and the principles of our republic are under attack by the President.

“Enough is enough. President Trump should resign or be removed from office by his Cabinet, or by the Congress.”

He said: “This is outrageous and the president caused it.” 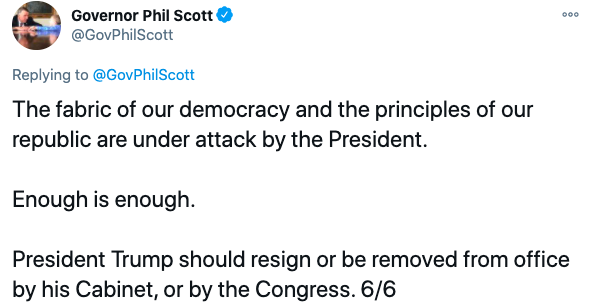 There have also been calls to use the 25th amendment to oust him.

Rep Jerry Nadler said: “I am safe. We are sheltering in place. Make no mistake: President Trump and his enablers are directly responsible for this violence.”

One user posted: “Protestors have breached the walls of the capitol building and the congress had to halt its work and shelter in place. No words for that which Trump us wrought. Still not too late for a 25 amendment removal.”.

Another wrote referencing Nazi Germany times: “Is this Trumps Night of the Broken Glass?


Who was Capitol police officer Howard Liebengood and how did he die?

“Congress, the Cabinet ,and the VP need to invoke 25 th amendment and clear the streets,” .

“Trump’s is way past the point of needing to be removed. Amendment 25!” one said.

An Appalachian Mountain Tour In The Mercedes G550
1 hour ago
South China Sea war fears ERUPT as US carrier group enters to confront Beijing
1 hour ago
Really, Nicola? SNP blunder as £700k spent on ‘political propaganda’ thank-you letters
1 hour ago
Mount Etna earthquake after incredible images show lava oozing amid explosive ‘fireworks’
1 hour ago
‘Let it go bust!’ – Boris Johnson told to reject proposals to buy struggling Eurostar
1 hour ago
BBC lost out on ‘millions’ as broadcaster told it should have ‘commercialised years ago’
1 hour ago

An Appalachian Mountain Tour In The Mercedes G550
1 hour ago
South China Sea war fears ERUPT as US carrier group enters to confront Beijing
1 hour ago
Really, Nicola? SNP blunder as £700k spent on ‘political propaganda’ thank-you letters
1 hour ago
Mount Etna earthquake after incredible images show lava oozing amid explosive ‘fireworks’
1 hour ago
‘Let it go bust!’ – Boris Johnson told to reject proposals to buy struggling Eurostar
1 hour ago
BBC lost out on ‘millions’ as broadcaster told it should have ‘commercialised years ago’
1 hour ago
Outrageous! MPs hit taxpayer with £9m bill for expenses while working from home
1 hour ago
Boris-Biden phone call photo sparks bizarre anti-Tory conspiracy theory – ‘This is weird!’
1 hour ago
Matt Hancock will not rule out vaccine passports as 8 schemes get £450k funding
1 hour ago
Xi terrified by Christianity surge in China – dictator fears ‘300 million-strong’ uprising
1 hour ago
ISIS commander killed: SAS sniper takes out five jihadis in explosion from long range shot
1 hour ago
Birx: Someone was delivering a ‘parallel set of data’ on coronavirus to Trump
1 hour ago