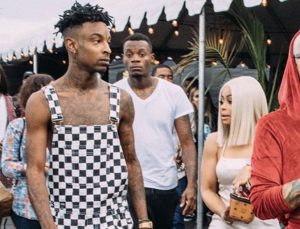 Over the past week, rappers have been on fashion patrol. It all began when Florida rapper, YK Osiris was the target of some fashion banter from the likes of 21 Savage and DJ Mustard. Both Savage and Mustard ridiculed Osiris on his custom-made Gucci jacket that sent the rest of Twitter to join in on the action. It looks like YK Osiris has become the bud of many jokes and target of trolling in Hip-Hop. The “Runnin” rapper even hosted a Clubhouse chat room dedicated to a funeral service for Osiris’ Gucci jacket. Meek Mill, Lil Yachty Yella Beezy, and more joined Mustard and Savage on the Gucci jacket clowning chronicles.

Now the tables have turned for 21 Savage. The Alabama artist Yung Bleu took to his Instagram to give the ATL rapper some smoke on a checkerboard jumpsuit that he wore in the past.

“Lil chest checker board built jazz boi,” started Bleu. “F**k was your thoughts this day? What in the 1010 Dalmatians I like to eat a rally’s sh*t is going on here.”

It is safe to say that 21 had it coming after calling Bleu’s Gucci jacket a “pumpkin.”

“Why you holding yo chain up with yo jacket tho…dam my brudda looking like a pumpkin,” said Savage on his IG.

This wasn’t the only post. Savage continued by finding another picture of Yung Bleu.

“I tell you what you don’t get ya cheetah girl t shirt mufasa lion king power puff girl pants wearing a**,” said 21.

Bleu was swift with his response.

“U still going? U thought the car was gone save u huh ! NOPE! Bisexual hall monitor lookin jazz it’s the stance for me. We’re the money reside looking azz”

It is good to see rappers roast each other in good spirited fun. Hopefully this energy is translated into new relationships for future collaborations in 2021.